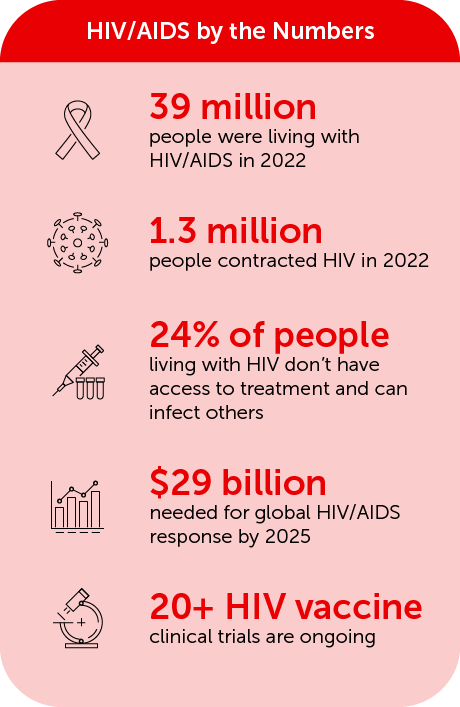 There are numerous scientific challenges to developing an HIV vaccine. The unprecedented genetic variability of the virus, its ability to quickly establish a persistent lifelong infection, and the fact that not a single person has cleared HIV on their own are just some of the obstacles researchers face in trying to understand how to induce protective immunity against the virus.

Given the complexity of combating HIV, traditional approaches to vaccine development that led to many of the licensed vaccines in use today are either impractical or have so far failed to result in effective vaccines.

Because of these challenges, IAVI’s scientists and their collaborators are pursuing innovative strategies to design vaccine immunogens capable of activating both arms of the adaptive immune response — antibodies and T cells — to induce durable immunity against HIV. 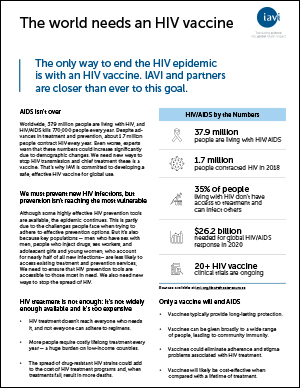 After more than a decade of concerted effort, new HIV vaccine candidates based on immunogens that are designed to stimulate B cells of the immune system to generate broadly neutralizing antibodies (bnAbs) against the virus are now in clinical trials.

The origin of this work began with the identification, beginning in 2009, of previously undescribed potent bnAbs from large cohorts of individuals living with HIV. Isolation of these antibodies set off a new era of HIV vaccine development. By analyzing how these antibodies interact with the virus and neutralize it in lab tests, scientists pinpointed several spots of vulnerability on HIV’s outermost protein known as HIV Envelope, or Env, which is the target of all bnAbs. They have used this information to design vaccine immunogens.

In addition, a detailed understanding of how bnAbs develop over time in individuals with HIV revealed the importance of engaging the initial B-cell populations expressing germline antigen receptors. These germline B cells represent the precursors from which bnAb responses can eventually develop, and researchers are now attempting to elicit them via the sequential delivery of a series of specifically designed HIV vaccine immunogens using an approach referred to as germline targeting.

This animation shows HIV’s outermost Envelope protein, known as the trimer (in gray), cycling through different conformations. The trimer is densely coated with sugar molecules (in purple) that do not trigger an immune response. Most of the surface of the trimer that is not covered in sugars is highly variable (in red and yellow), making it difficult for the immune system to generate antibodies that are capable of neutralizing multiple strains of HIV. Photo credit: Sergey Menis, IAVI

The first of these engineered immunogens (eOD-GT8 60mer) developed by IAVI and its partners was shown to successfully engage the target germline B cells in a Phase I clinical trial. In a follow-up Phase I clinical trial, IAVI G002, IAVI and its partners are now testing the ability of a second engineered immunogen (Core-g28-v2 60mer) to further guide the responses primed by eOD-GT8 60mer toward the development of bnAbs. This represents a significant step in the long and complicated process required to induce bnAbs. In this trial, both immunogens are being delivered via Moderna’s messenger RNA (mRNA) technology.

A trial that began in May 2022, IAVI G003, is designed to test the hypothesis that vaccination with eOD-GT8 60mer, delivered via Moderna’s mRNA platform, can induce similar immune responses in African populations as were seen in IAVI G001.

Another scientific development fueling the design of immunogens to induce bnAbs was obtaining a clearer understanding of the structure of Env. For decades scientists were hindered by their inability to capture the precise structure of this notoriously unstable trimeric protein, but advances have allowed them to both stabilize and understand Env in unprecedented detail. Specifically, researchers have developed and are testing engineered vaccine immunogens that are meant to look like the actual structure of Env. IAVI is supporting the development and clinical evaluation of some of these so-called native-like trimers. One such candidate, BG505 SOSIP.664 gp140, adjuvanted, is being evaluated in a Phase I clinical trial at two locations in the U.S. and one in Kenya.

Read more about this new generation of HIV vaccine candidates.

IAVI also supports research into vaccine approaches that are intended primarily to elicit broadly reactive, potent antiviral T-cell responses against HIV. Some of the most promising T-cell immunogens in development are specifically designed to address the global diversity of HIV. IAVI is supporting the clinical development of one of these approaches, a so-called conserved HIV immunogen, which combines portions of the virus, or viral epitopes, that are consistent across most of the genetically distinct variants of HIV currently in circulation.

Through its African-led science initiative known as VISTA, IAVI and its clinical research partners are also helping to guide the design and assessment of next-generation T-cell immunogens. The VISTA consortia are also involved in efforts to identify the types of T-cell responses that are associated with the spontaneous control of HIV infection that occurs among a certain subset of infected individuals known as elite controllers.

An important research initiative at IAVI involves vaccine technologies that make it possible to deliver immunogens into the body efficiently and effectively. Two technologies to accomplish this goal are being investigated by IAVI and its partners.

One technology is to use a replicating viral vector, and researchers at IAVI are primarily focusing on vesicular stomatitis virus (VSV). They are working on a recombinant VSV vector that incorporates an HIV Envelope gene and are testing it in preclinical studies. The rVSV vector with the HIV gene insert is designed to be used as a preventive vaccine, but this approach may also have therapeutic applications. IAVI also has rVSV-vectored vaccine candidates in development for Lassa fever, Marburg virus disease, Ebola Sudan virus disease, and COVID-19.

The second technology IAVI is exploring as a way to deliver vaccine immunogens is messenger RNA (mRNA). mRNA directs synthesis of proteins inside cells that your body needs to perform its many functions. It was first used in licensed vaccines for COVID-19, and safely delivers instructions to cells to produce a SARS-CoV-2 protein that stimulates a protective immune response. In IAVI G002 and IAVI G003, IAVI and biotechnology company Moderna are investigating the use of mRNA to deliver HIV antigens and elicit targeted immune responses. 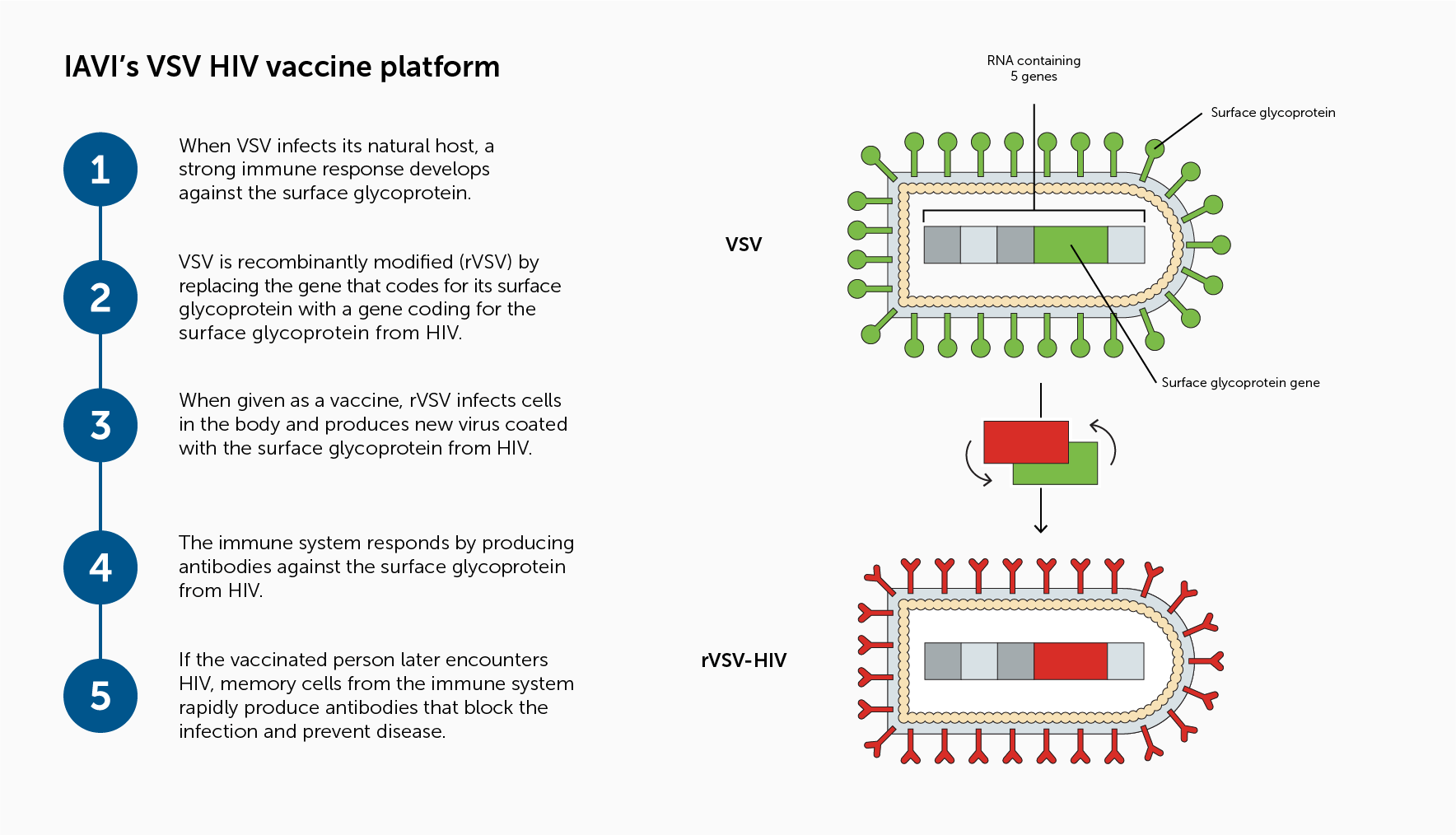