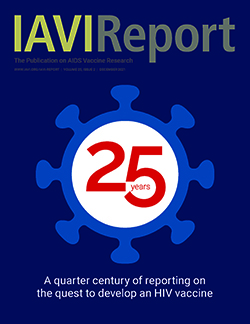 This year IAVI is celebrating its 25th anniversary. And so are we.

The first issue of IAVI Report was published in the summer of 1996. It described IAVI’s formation and mission, offered the scientific reasons for why an AIDS vaccine was feasible, chronicled advances in AIDS vaccine research, included the voice of one of Uganda’s leading HIV/AIDS scientists on HIV vaccine research, and provided a perspective from an industry scientist on their role in HIV vaccine development.

This inaugural issue set the tone for the publication. Ever since then we have been returning to these same issues — the science, the progress, the voices of researchers across the globe, and the importance of continuing the quest to develop an HIV vaccine and bring an end to AIDS once and for all.

There have been several ups and downs in the field, for sure, and our goal has always been to provide context and a range of opinions on the scientific issues of the day. We’ve covered major scientific conferences across the globe, tackled complex scientific issues and tried to make them easier to understand, and interviewed experts, including Françoise Barré-Sinoussi, Anthony Fauci, and many others.

We also had fun. There was the article Chemistry Lab, which profiled four pairs of HIV researchers, who also happen to be married; the articles on the intersection of art and science, including this one that provided an artist’s perspective on the HIV Envelope trimer; and the covers that featured striking scientific images shared by researchers, some of which are shown here, including my personal favorite Andy Warhol-inspired cover of native-like trimer structures.

To commemorate IAVI Report’s anniversary, we’ve put together this special issue. In it, we document the major milestones in 40 years of HIV vaccine research; interview IAVI’s founder and CEO Seth Berkley and its current CEO Mark Feinberg; and provide an update on the science and access issues that the field is focusing on now.

We also interview expert vaccine developer Stanley Plotkin, who was interviewed in that first issue of IAVI Report, to reflect on the remarkable progress in vaccinology and the challenges that HIV vaccine researchers still face today.

As with every issue over the past 25 years, we hope this one provides a unique perspective on the inspiring and elegant science that is underway and the dedicated and passionate people who are leading it.

Working on IAVI Report has been a fascinating and rewarding journey — one that I have enjoyed tremendously. I am grateful to IAVI for its support of this publication, the team that makes it all possible, and for you, our readers, who make it worthwhile.