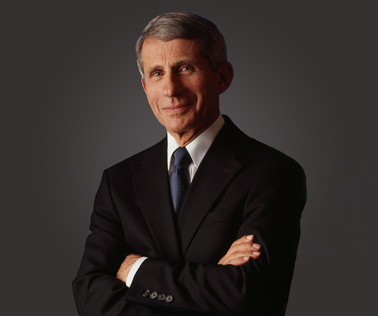 The end of an era

At the end of this month, Anthony Fauci will resign from his post as director of the U.S. National Institute of Allergy and Infectious Diseases (NIAID), a position he’s held for 38 years. Through more than 50 years of public service, multiple administrations, numerous infectious disease outbreaks — most notably the HIV/AIDS and COVID-19 pandemics — and many politically motivated controversies, he remains a stalwart supporter of the transformative power of science.

He is also one of the finest science communicators there is, and I am fortunate to have had several opportunities over the years to interview him on a range of topics, including HIV vaccine research and development. In a 2009 interview with IAVI Report, Fauci had this to say: “I see myself as an honest broker of science. That’s the reason why I think I’ve been able to be effective.”

Since March 2020, and the start of the COVID-19 pandemic, Fauci has become a household name. But for those working on or living with HIV/AIDS, Fauci’s renown began decades earlier.

In 1981, like many scientists at the time, Fauci was drawn to understanding a mysterious new illness that surfaced among otherwise healthy gay men. “I decided in the summer of 1981 that I would change the direction of my laboratory and focus only on this unusual disease called at that time gay Related Immunodeficiency Disease, or gRID. We didn’t know it was a virus … but it was acting like a virus, and it was destroying the immune system,” Fauci told IAVI Report in a Living History series that featured him in his own words.

Three years later he was appointed director of NIAID. From that point on, HIV/AIDS research continued to be a cornerstone of his own work, and a primary focus of the institute. “A lot of people got angry that the new director of NIAID was putting all of this money into AIDS. But at that time people thought … it would not have a major public health impact, and of course history has shown that that is absolutely not the case.”

Despite his efforts to jumpstart research into this new virus, he faced intense scrutiny and derision from the activist community. In the beginning of the HIV/AIDS epidemic in the U.S. he was subjected to a firestorm of criticism from activists who accused him of impeding testing of and access to early treatments. He responded by opening his home to activists and listening to their concerns. He let them into what were previously private discussions among government administrators and regulators and made them part of the process. This forever changed the way drugs are developed and eventually earned him great respect among scientists and advocates alike.

Fauci remained at the forefront of the U.S. HIV/AIDS response throughout his long career and was a leading architect of the President’s Emergency Plan for AIDS Relief (PEPFAR) — a program instituted by then President George W. Bush to deliver lifesaving HIV/AIDS drugs to resource-poor countries most affected by the virus. The program is credited with saving 20 million lives globally. In his recent New York Times opinion essay, Fauci called his experience designing and implementing PEPFAR the “privilege and honor of my lifetime.” He also noted that “PEPFAR is an example of what can be accomplished when policymakers aspire to bold goals, underpinned by science.”

Fauci is one of the most cited scientists, authoring decades of scientific papers and editorials on HIV/AIDS immunology and policy issues. He was also a regular speaker at HIV/AIDS conferences over the years, where he was most often tasked with summarizing the state of the field — something he knew better than anyone. At the 24th International AIDS Conference, AIDS 2022, held this summer in Montreal, Canada, Fauci was introduced by Dr. Laura Waters, chair of the British HIV Association. She took the opportunity to acknowledge the “unacceptable levels of attacks and abuse” that have been leveled against him during the COVID-19 pandemic and apologized on behalf of humanity for what he has had to endure.

Today, the U.S. National Institutes of Health spends more than three billion dollars a year on HIV/AIDS research, including efforts to develop a vaccine and a cure. Despite the many success stories of 40 years of HIV research — lifesaving antiretroviral therapy being the most significant — a vaccine and cure remain elusive. But these efforts remain near and dear to Fauci.

“Some unfinished business that I would like to see [resolved] is getting a safe and effective vaccine for HIV. Even though we’ve done spectacularly well with the development of drugs that have transformed the lives of persons with HIV, both from a treatment standpoint, and from a pre-exposure prophylaxis standpoint, there is that one challenge that we still haven’t met: a safe and effective vaccine. And it’s very difficult because of the nature of HIV,” he said recently in this interview.

Unlike SARS-CoV-2, for which vaccines were developed in 11 months, HIV presents numerous challenges to vaccine researchers, and they’ve spent decades developing complex strategies to train the immune system to fend off this virus, or to develop a more widely applicable way to cure the disease, which Fauci calls more of an aspirational goal.

“With other viruses, nature tells us just follow me and I’ll lead you to a vaccine. With HIV, nature is telling us if you follow me, you’re going to be in trouble. We’re going to have to push the envelope with HIV vaccinology in ways that we never had to do before,” Fauci said back in 2009. And pushing the envelope is exactly what researchers continue to do.

Whether or not Fauci sees the fruits of those efforts, it will be his ardent belief in science and how it can be used to improve human health that will be one of his greatest legacies. “I feel that as we probe the scientific secrets of HIV, we may get there,” he said in 2009, referring to an HIV vaccine. “If we can — with our own capabilities, intellect, and drive — manipulate the immune system to do something that natural infection doesn’t seem to be able to do, what else can we do with the immune system? The vista is almost infinite.”

Indeed, it is. Thank you, Dr. Fauci, for showing that to all of us.