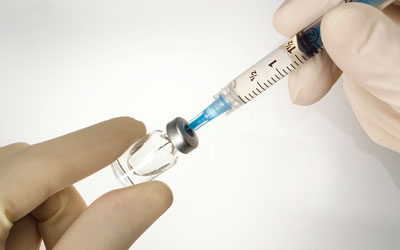 At the 2017 International AIDS Society conference in Paris, scientists announced that in an early-stage clinical trial, a new HIV vaccine regimen generated antibody responses in 100 percent of volunteers in most arms of the study.

Scientists at the 2017 International AIDS Society conference in Paris recently announced that in an early-stage clinical trial, a new HIV vaccine regimen generated antibody responses in 100 percent of volunteers in most arms of the study. The global pharmaceutical company Janssen led the trial, known as APPROACH, which amongst others is supported by the International AIDS Vaccine Initiative (IAVI) and its clinical research center (CRC) partners in Africa. Volunteers recruited by PSF in Kigali, Rwanda, and UVRI-IAVI in Entebbe, Uganda – both part of the IAVI-Africa Clinical Research Network – were among those who participated.

Paul Stoffels, Chief Scientific Officer at Janssen’s parent company Johnson & Johnson, said in a press release issued on July 24, 2017: “In recent years, a new optimism has emerged that we will find an effective HIV vaccine in our lifetime. The results from today’s study add to that belief and we look forward to advancing to the next stage of clinical development as quickly as possible.”

A safe and effective AIDS vaccine would help prevent thousands of new infections and offer lasting protection to millions of people worldwide. Though more than 19 million people now receive antiretroviral drugs to treat HIV infection, 1.8 million are newly infected each year and more than half that number die annually from AIDS-related causes. Widespread access to current HIV prevention technologies is limited among groups most vulnerable to HIV infection such as women and adolescent girls. Scientists working to develop a vaccine face several major challenges, including the variability and mutability of the virus. Because HIV is genetically diverse, it can mutate rapidly over time with different strains prevalent in different regions. Even if a newly developed vaccine is effective in one country, it may not work elsewhere or stay effective for long.

APPROACH represents an important step to solving this problem. The trial, based on a so-called “mosaic” vaccine, includes genetic material from several different subtypes of HIV rather than just a single strain. Once pieced together, researchers delivered this patchwork of immunogens into the body by using an adenovirus (Ad26). This “viral vector,” a harmless virus that is used to shuttle fragments of HIV safely into the body, enables the immune system to learn to recognize and fight HIV without risk of infection.

In the trial, 393 HIV-negative adults in Rwanda, South Africa, Thailand, Uganda, and the United States were given the vaccine or placebo. The trial aimed to test the vaccine’s safety and tolerability and whether it generated a favorable immune response. Volunteers received two prime doses of the Ad26.Mos.HIV mosaic (to help “prime” their immune system) followed by two boosts of either Ad26.Mos.HIV, MVA-Mosaic and/or different doses of the soluble protein Clade C gp140 (to subsequently “boost” their immune system’s response).

The results showed that the vaccines appeared to be well-tolerated. Injection site pain, headache and fatigue were the most common reported adverse events. Significantly, in most arms of the study, analysis after all four vaccine doses had been injected revealed that 100 percent of volunteers showed an antibody response. Their immune systems recognized the presence of the mosaic, responded to it, and began preparing to fight. Based on these encouraging results as well as results expected in late 2017 from another Phase 2a clinical trial called TRAVERSE, scientists hope to proceed with a Phase 2b proof-of-concept trial as early as late 2017, giving the vaccine to far more people. IAVI CRC partners in Ndola and Lusaka, Zambia, are expected to be among the trial sites in this next phase, which demonstrates IAVI’s continued partnership in this important effort.