Discoveries by IAVI and partners in the latter half of 2017 answered existing questions and raised a few more. 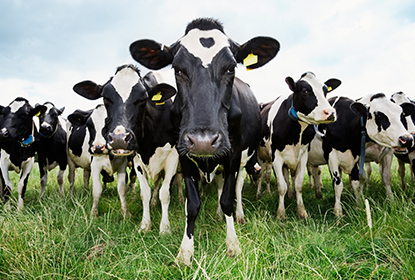 Bovine bNAbs stole the spotlight at IAS 2017 in Paris.

The road toward an effective HIV is marked by fresh findings, promising new pathways for development, and the occasional breakthrough. This year offered a mix of all three, and as always with scientific progress – more questions to answer.

Most recently, scientists with IAVI and The Scripps Research Institute (TSRI) captured molecular-level images that allowed them to watch bNAbs develop in reverse. Elise Landais, IAVI senior research scientist, is lead author on the paper, published November 21 in Immunity. “Our findings show that certain viral features play a critical role in bnAb elicitation,” she said. “The next step is to more clearly define this relationship, which we can potentially use as a template for HIV vaccine design.” Read more.

In July, Devin Sok, director of antibody discovery and development, reported the elicitation of bNAbs in cows in a matter of weeks – a process that usually takes years in humans. This is the first time scientists have successfully elicited bNAbs in an animal model. He presented his findings, published in the journal Nature, at the 2017 International AIDS Society (IAS) conference in Paris, where he described how long, arm-like loops on the antibodies were able to reach under HIV’s protective fence of sugars to block infection. The discovery “stunned” Sok and his team, and news of the cows’ scientific contributions traveled fast, especially because they could inform prevention research on other pathogens. Read more.

Also at IAS, scientists announced promising results from a Janssen-led HIV vaccine clinical trial in which 100 percent of volunteers generated antibody responses in most arms of the study. The regimen is a “mosaic” vaccine and includes genetic material from several different subtypes of HIV rather than just a single strain. Trial participants included volunteers recruited at Projet San Francisco in Kigali, Rwanda, and Uganda Virus Research Institute-IAVI HIV Vaccine Program in Entebbe, Uganda – both part of the IAVI-Africa Clinical Research Network. Enrollment has begun for a follow-up, Phase IIb, proof-of-concept trial, which will include volunteers recruited at network partners in Ndola and Lusaka, Zambia. Read more.

September saw the start of fall and a new collaboration between IAVI and Cancer Research UK (CRUK). Jonathan Hare, senior manager of IAVI’s Human Immunology Laboratory, and Charles Swanton of the Francis Crick Institute received a Pioneer Award from CRUK – a grant of £200,000 over two years that funds their search for immunological parallels between HIV/AIDS and non-small cell lung cancer. “Scientists have ruminated on the crossover between cancer and HIV for years,” said Hare. "Though some data exists to suggest a connection, we can now get started on a more systematic approach to identifying common ground.” Read more.

In October, two new discoveries made at IAVI’s Neutralizing Antibody Center (NAC) at TSRI were published in PLOS Pathogens and Science. Both involve bNAbs, and could have implications for development of both a vaccine and long-acting HIV prevention. In the former, scientists “deleted” part of the HIV’s protective sugar fence, in turn allowing bNAb-precursors to develop, according to senior author Richard Wyatt, director of viral immunology at the NAC. The latter describes a “super-antibody” that combines three different bNAbs previously identified by scientists at the National Institutes of Health and at TSRI, including Dennis Burton, scientific director of the NAC. Read more.

Stay tuned for more on these and other developing research stories in 2018.