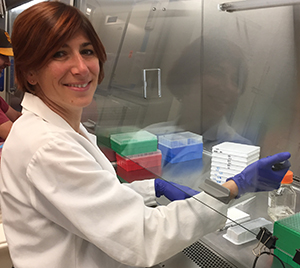 Elise Landais, Senior Research Scientist“Uncovering the process by which neutralizing antibodies develop is critical to HIV vaccine design,” said Elise Landais, Senior Research Scientist with IAVI and lead author of the study. “A small fraction of people living with HIV can naturally produce exceptionally powerful and broad antibodies that could prevent HIV from infecting their immune cells, but not until several years post-infection – long after that protection can help them. But it is of enormous interest to vaccine researchers.”

From samples out of IAVI’s landmark Protocol C epidemiological study, Landais and team selected an African individual infected with HIV subtype-A. Known as PC64, this volunteer developed HIV broadly neutralizing antibodies (bnAbs) targeting the vulnerable V2-apex site on HIV’s surface. This particular type of bnAb is among the most potent, or effective neutralizers of HIV. Their breadth allows them to block the majority of HIV strains.

Applying an advanced technique called next-generation sequencing, the researchers were able to watch these bnAbs develop in reverse. They first took a series of “snapshots” depicting the interplay of PC64’s immune response with the volunteer’s infecting virus over time. Then, using these images, they retraced bnAb development back to the initiation stage, observing that certain viral changes promoted antibody breadth. Follow-up experiments revealed evolutionary similarities between the virus in PC64 and another infecting a CAPRISA study volunteer who developed the same type of bnAbs. The authors also highlighted the impact of additional viral structural attributes.

“These new findings are consistent and complementary with previous work by IAVI and partners and together could offer a possible template for vaccine design,” said Landais. “We’re one step closer to a vaccine that would protect healthy people from HIV infection, but further research is needed to achieve an optimal design.”

Landais et. al. support a sequential immunization strategy, one of several that scientists are collaboratively investigating at the IAVI Neutralizing Antibody Center (NAC) at TSRI. Using data from IAVI’s partner network of clinical research centers in Africa and India, NAC scientists aim to translate laboratory findings into a workable vaccine and other long-acting HIV prevention.

“Development of new and more effective prevention is paramount to ending the HIV/AIDS epidemic,” said IAVI CEO Mark Feinberg. “Of all the tools needed to curb new HIV infections, a vaccine is arguably the most cost-effective and transformative. We’re unlikely to end AIDS without one.”