Women Leading the Fight Against HIV/AIDS 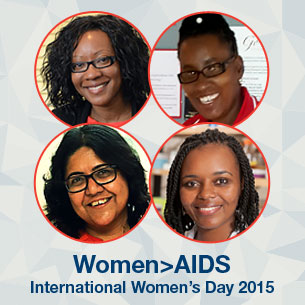 HIV/AIDS, the world’s leading cause of death among women of reproductive age, takes an enormous toll on the lives and potential of millions of women — and on the families, communities and economies they support.

Women are more susceptible to HIV than men. In the epidemic’s hardest-hit regions, deep gender inequity as well as violence, poverty and limited education can restrict women’s access to potentially life-saving information, prevention and treatment and their ability to negotiate safe sex. These same factors force many women into the sex trade, further decreasing their power and increasing the stigma barriers to their accessing HIV prevention and treatment.

An AIDS vaccine would be a powerful tool to help women redress some of these lethal imbalances. Delivered confidentially, before exposure to the virus and invisible to partners and peers, a vaccine could help empower women to protect themselves — and their families and societies — against this deadly disease.

Meet four remarkable women helping to lead the search for an AIDS vaccine.

“I may not have been able to save my parents, but I have an opportunity with IAVI to work in the development of a vaccine that can help thousands of others who are as helpless as I was.”
- Kundai Chinyenze, IAVI Medical Director, Medical Affairs, Nairobi

Dr. Kundai Chinyenze ensures that IAVI and our partners conduct clinical trials and epidemiological studies to the highest international standards and practices. She has an MD and a master’s in public health, and has trained clinicians across East and Southern Africa.

Growing up in Zimbabwe, she always loved science and planned to become a chemical engineer. As a teenager, she recalls, “I returned home one day excitedly holding my Cambridge O Level results that I had aced and was looking forward to rewarding my mother with — she had worked so hard to put me through school. I found her at home in a delirious state. She didn’t even recognize me. I never got to show her my grades.”

She only learned what was wrong when she later heard nurses outside her mother’s hospital room whispering about “HIV.”

“I asked the doctor to explain to me what was going on and he refused to say anything,” she said. “AIDS was considered a very ‘shameful’ disease. No one wanted to acknowledge it and people preferred not to know if they were infected. Both my parents were diagnosed late and, even though I was one of their caregivers, I was not told what ailed them or how I could better support them or protect myself from infection.”

Both her parents died from AIDS, within two years of each other.

Today, she has children of her own and says: “Prevention research is my passion. Vaccines have leveled the playing field — whether you are rich or poor you are protected, for a very long time or for life. I dream of an HIV vaccine that will be part of national immunization programs so that everyone can access them and never have to deal with the burden of the disease or taking drugs for life or all the other social issues of HIV. We need a prevention method that allows people to live with one less fear and focus on living.

“Having an AIDS vaccine will give women courage and strength. I have two daughters. A vaccine needs to come for the sake of our kids.”
- Matshidiso “Tshidi” Malefo, Social Science Coordinator
at the Rustenburg Research Centre of IAVI partner The Aurum Institute.

Matshidiso “Tshidi” Malefo works on socio-behavioral and epidemiological studies related to HIV prevention in this South Africa mining town, where women and girls are at an especially high risk of HIV infection.

“We still have a long way to go to fight HIV. Adherence is a big challenge in our communities. We are still trying to promote women’s empowerment, but women have the added challenge of having to negotiate condoms or say no to their partners.

Women need an AIDS vaccine so that even the most vulnerable women can take control of their lives without needing permission from their partners.

“An affordable AIDS vaccine, combined with an active awareness and counselling effort, could prevent infection in millions of women, especially those in low- and middle-income countries who are unable to negotiate safer sex due to social and cultural norms.”
- Shreyasi Chatterjee, project manager in the
HIV Vaccine Translational Research Laboratory in Delhi

Shreyasi Chatterjee is a project manager in the HIV Vaccine Translational Research Laboratory in Delhi, a joint venture between IAVI and the Government of India’s Translational Health Science and Technology Institute (THSTI) to design and evaluate immunogens that elicit an immune response capable of neutralizing a broad spectrum of HIV’s variants.

“India has the world’s third-highest number of people with HIV; some 2.1 million Indians represent 40 percent of the people living with HIV in the Asia-Pacific. Access to health care is a basic human right, but the low socio-economic status of women, especially in India’s patriarchal society and rural areas, means that HIV-positive women routinely face targeted stigma and discrimination that limits their ability to seek medical help.

“I joined IAVI in 2014, when I was working as a research scientist in Texas and looking for an opportunity to return to India and contribute to the development of affordable health care. Today I am privileged and proud to work in a non-profit organization alongside so many talented people committed to conquering the many challenges to bring India and the world an AIDS vaccine. As a lab trainee working in West Bengal, I have witnessed first-hand the discrimination and stigma that women face in our country, especially when they come from a low socio-economic background.

“HIV/AIDS was a message in your face growing up in Kenya even if you didn’t know anyone infected. At my university we all had to take a module on HIV infection whatever you were studying—even fashion. While progress has made it possible for millions of HIV-positive people to lead productive lives, millions of others still can’t access treatment.”
- Gladys Njeri Macharia, researcher, Kenya Medical Research Institute

Growing up in Nairobi, she knew from a young age that she wanted to be a scientist and early on chose to work on vaccines, “one of the most powerful tools you could ever have to fight infectious diseases. I didn’t think HIV would be that hard. I didn’t know enough to know what challenges were there. I was convinced that I’d make huge progress in just a couple of years. A healthy society needs healthy women. It is enormously challenging to design an effective HIV vaccine — but a vaccine is essential to ending the epidemic.”

Currently on a training placement at Emory University in Atlanta, Ms. Macharia focuses on the earliest T-cell mediated responses against HIV; the techniques she learns will benefit her own studies and support the efforts of many other HIV vaccine researchers when she returns to KEMRI. (Click here for a recent publication she co-authored.) Ms. Macharia’s training is part of a broader IAVI partnership, funded by USAID, to enhance African scientific leadership in the effort to design, develop and evaluate an effective HIV vaccine for Africa.