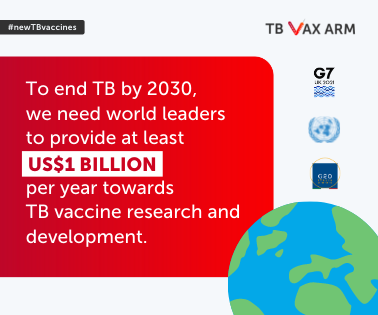 In a direct address to their Heads of State and Government, a group of tuberculosis (TB) survivors from the G20 nations sent a letter to their political leaders as they prepare to gather at the G20 Summit in Rome, calling upon them to uphold their promise made at the United Nations High-Level Meeting (UN HLM) on TB in 2018 to develop new vaccines against TB. Written by a group of TB survivors and signed by TB survivors from each of the G20 countries and over 55 organizations around the world, the letter asks G20 leaders to secure an annual investment of at least US$1 billion in TB vaccine research so that new TB vaccines are possible as early as 2025.

The letter is endorsed by the TB Vaccine Advocacy Roadmap (TB Vax ARM), a new global coalition of TB advocates and allied organizations spearheaded by IAVI, Results UK, and TAG. The coalition has come together to accelerate TB vaccine development by ensuring a fully funded and resourced TB vaccine pipeline by 2023, a requirement for delivering new TB vaccines in time to end the TB epidemic by 2030, the goal set at the UN HLM in 2018.

In the letter, TB survivors remind their leaders that even in the face of COVID-19, which killed 1.7 million people in 2020, TB remained the leading infectious cause of death in much of the world: “TB is a disease of inequity — over 90% of people who fall sick with TB live in developing and emerging economies. New TB vaccines could help protect us from the suffering we have experienced and save the precious lives and livelihoods of millions around the world from the leading infectious killer before COVID-19. We call on G20 countries to commit the resources needed to develop life-saving vaccines so that we can truly end TB during this decade,’’ said Rhea Lobo, a TB survivor from India who helped lead this initiative.

Eliminating TB will require developing new vaccines against the disease. Diagnostic and treatment options for TB remain sorely inadequate and are oftentimes toxic and difficult to adhere to, factors which contribute to the spread of drug-resistant TB, and thus to the alarming growth of antimicrobial resistance. As well as preventing TB disease and transmission, new TB vaccines will provide a major tool for curbing the spread of drug-resistant TB since the mechanisms of vaccine protection will be different than those that confer drug resistance. “Currently, the only TB vaccine available is the BCG, a century old technology that, notwithstanding its protection in children, does not protect against the deadliest and most infectious forms of TB in adults and adolescents. Because TB among adults and adolescents accounts for most TB transmission and deaths, BCG alone cannot end the global epidemic,” said Aaron Oxley, RESULTS UK executive director.

Despite global commitments enshrined in the Political Declaration on TB endorsed by all UN member states in 2018, TB research continues to face an annual $1.1 billion shortfall, while funding for TB vaccine R&D has never exceeded $120 million per year. “By now, TB vaccine research will need an annual investment of at least $1 billion to achieve the momentum needed to eliminate TB by 2030,’’ said Uvistra Naidoo, a TB survivor from South Africa who helped develop the letter. “We all know that vaccines are needed to eliminate a global epidemic, and TB is no exception. We also know it is possible¬ — the lightning-quick development of COVID-19 vaccines shows that if there is political will, there are resources to make it happen. The inclusion of TB in the recent G20 Health Declaration is a positive step in this direction, but we need the funding.”

“Even in the face of chronic underfunding, decades of painstaking scientific progress and ingenuity have generated the most advanced pipeline of TB vaccine candidates the world has ever seen,” said Kundai Chinyenze, executive medical director, IAVI. ‘’We have promising vaccine candidates and we know how to move them forward. Late-stage vaccine research is expensive, but in fact it is only a tiny fraction of the tremendous human and economic cost of the TB epidemic. After COVID-19 everybody understands better than ever that investing in vaccines is not just the right thing to do, it is the smart thing to do. We need governments, starting with the G20 countries, and other funders to step up and jointly secure the resources that the field needs to make new TB vaccines a reality.”

Mike Frick, TAG’s TB project co-director, offered an unambiguous perspective: “Governments cumulatively spent $104 billion on research and development of COVID-19 vaccine and therapeutics in the first 11 months of the pandemic. That is 75 times more than the money governments and other funders spent on TB vaccine research over the 11 years from 2005 to 2019. This disparity signals a clear abdication of responsibility on the part of governments to protect the human rights of people with TB to health and scientific progress. It is past time that we as a TB community start expecting — and demanding — more.”

A campaign toolkit including communication assets and the Open Letter has been broadly disseminated among supporters and stakeholders, together with the letter to G20 leaders. For more information on the work of the TB Vax ARM, and to find out how you get involved in TB vaccine advocacy, please visit newtbvaccines.org/take-action.