Surveying the HIV Vaccine and Cure Landscape at AIDS 2020 Virtual 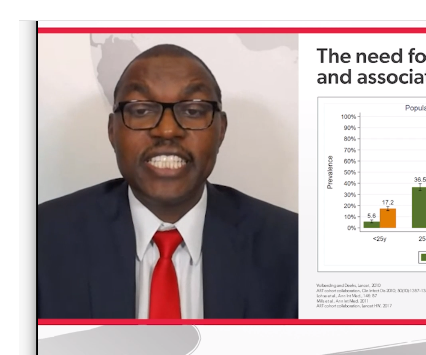 “At the end of the day, we have to have an impact on the epidemic, not in the lab,” said Thumbi Ndung’u, Ph.D., head of the Africa Health Research Institute, and professor, University of KwaZulu-Natal, at AIDS2020 Virtual, the COVID-19 adapted conference by the International AIDS Society. In a plenary session video delivered via the conference e-platform, Ndung’u highlighted the need to advance HIV vaccine candidates into the real world by conducting small, intensive, hypothesis-driven clinical studies to assess promising new vaccine concepts. Against the backdrop of the release earlier in the week by UNAIDS of new numbers on HIV acquisitions – which have distressingly remained about the same in 2019 as in 2018 – Ndung'u’s message was particularly relevant, as was his description of the promise of HIV cure strategies.

While overall Ndung'u is heartened by how many HIV vaccine candidates are in clinical trials, he noted that most of them wouldn’t advance into large-scale efficacy trials and that the need to test novel concepts in humans remains paramount to ensure that the pipeline delivers new candidates.

In particular, vaccine approaches designed to elicit broadly neutralizing antibodies via germline targeting vaccine designs drew Ndung'u’s attention, as did the mosaic antigen approach used in the HVTN 702 Phase 2 trial, among others. Though the diversity of HIV is a main challenge for most vaccine developers, mosaic antigens are computationally optimized fragments of HIV, delivered in the case of HVTN 702 via an adenovirus vector, that may be able to address the range of HIV diversity. When given as vaccine, these mosaic antigens have been shown to yield higher breadth and magnitude of HIV-specific immune responses.

The cytomegalovirus vector approach developed by Louis Picker, shown in animals to induce T effector memory cells needed within a short time of exposure to intercept infection in tissues, also remains promising, said Ndung’u, though that concept has not advanced into clinical trials.

But given that most of the candidates are still in early phases of research, attempts to achieve HIV cure might be more attainable in the shorter term.

Cure strategies can be divided into two camps: attempts to achieve eradication of the virus in the human host, or attempts to guide the human host into long-term viral remission. Of these camps, Ndung’u noted that remission studies in non-human primates and humans are more common and typically use one of the following strategies:

Ndung’u regards the combination approach as most promising. However, success will likely depend on certain conditions in the individual: low disease burden and lower genetic complexity of HIV, low inflammation, and sustained host responses that are primed, reside within tissues, and target susceptible epitopes on HIV.

His team plans a proof-of-concept study in South Africa based on a cohort in which individuals have been identified with early acute HIV infection. These individuals will receive intensive,immediate antiretroviral therapy following detection of acute infection to set the stage for remission: the goal of this early treatment is to blunt peak viremia, create a low viral reservoir, prevent virus diversification, and preserve immune function. Then individuals will receive toll-like receptor agonists to reverse viral latency. Researchers will have characterized the transmitted/founder virus – the virus that establishes systemic infection in an individual –  enabling them to identify antibodies to administer that will have direct antiviral effect and will stimulate new immune responses, with the goal of long-term remission. In the future, a vaccine could be added to the cure arsenal to activate many of the immune responses thought necessary for remission.

IAVI’s president and CEO Mark Feinberg, M.D., Ph.D., moderated the session and asked Ndung’u how resource-limited countries could play a larger role in HIV vaccine research, particularly given Ndung’u’s call for more nimble, hypothesis-driven trials. Ndung’u noted that some these trials, particularly those designed to elicit specific antibody responses that require specialized laboratory capabilities, might need to be conducted first in resource-rich countries. But once they yield evidence about which approaches are most promising, new collaborations and funding must be encouraged to move the next phases of these trials into resource-limited settings quickly. Even given the backdrop of expanded availability of pre-exposure prophylaxis, or PrEP, and potential availability of long-acting antiretrovirals, Ndung’u thinks opportunities to evaluate vaccine candidates in high-incidence areas are abundant and necessary to cultivate.

The session closed with a reflection by Feinberg and Ndung’u on the rapid pace and innovation seen in the scientific community’s response to developing COVID-19 vaccines and treatments while the HIV pandemic continues its grinding course. Ndung’u observed that the rapid, flexible response to the new coronavirus wouldn’t have been possible without the infrastructure and methods of HIV research. COVID-19 will likely recede eventually, given the pace of vaccine development, but HIV will still be with us as it fades. For that challenge, continued investment and resources are still needed.