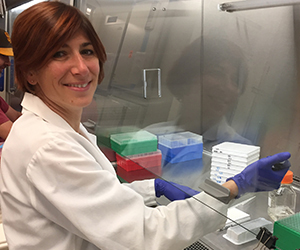 Scientists at IAVI, Scripps Research, and the University of California, San Diego (UCSD) have identified antibodies from the blood of recovered COVID-19 patients that are capable of neutralizing SARS-CoV-2, according to a study published today in Science.

"Like many other scientists around the world, we were moved to action by the urgent need for effective countermeasures against the pandemic,” said Elise Landais, Ph.D., principal scientist, IAVI, and study co-author. “For the past three months, we have focused our collective efforts on isolating some of the most potent antibodies against SARS-CoV-2 toward developing a medical countermeasure than can potentially reduce disease severity or, when used for prevention, provide protection for weeks at a time.”

Public health experts agree that a vaccine, deployed as quickly and widely as possible, will be needed to end the COVID-19 pandemic. More than 100 vaccine candidates are in various stages of development. While we await a vaccine, long-lasting antibody injections could be a life-saving prevention alternative for frontline health care workers and other vulnerable populations who might not respond as well to a vaccine. And, when used shortly after exposure to the virus, antibodies have the potential to protect against severe disease.

Importantly, the work of IAVI, Scripps, and UCSD compressed what is typically a year-long discovery process into seven weeks, said Landais, who works in the laboratory of Devin Sok, Ph.D., senior director, Antibody Discovery and Development, IAVI. The resulting antibodies are among the most effective yet isolated at blocking infection as measured in human cell culture.

The collaborators conducted a series of parallel steps to accelerate their efforts. They enrolled a cohort of volunteers who had previously recovered from COVID-19 and developed a series of laboratory experiments to test their blood plasma for neutralizing activity against SARS-CoV-2. They characterized more than 2,000 promising antibodies, and further evaluated neutralizing activity of the most potent antibodies they found.

Animals that received a high dose of the most neutralizing antibody were protected against disease after challenge with SARS-CoV-2. Additional tests are needed in alternative animal models to ensure translation to humans.

“We are committed to further development so these promising antibodies can become globally available to those who need them most, including those in low- and middle-income countries," Landais added.

The team’s work builds on more than a decade of scientific partnership between IAVI and Scripps through the IAVI Neutralizing Antibody Center (NAC) at Scripps Research in La Jolla. Using blood samples from infected donors around the world, NAC scientists have isolated and optimized powerful antibodies capable of blocking HIV infection to hasten the development of new HIV prevention, treatment, and vaccines.

The NAC’S capacities have been enabled by the generous support of many of IAVI’s donors, including the Bill & Melinda Gates Foundation (BMGF), the Governments of Denmark (through Danida), Ireland (through Irish Aid), The Netherlands (through the Ministry of Foreign Affairs), Norway (through Norad), and the United Kingdom (through DFID), and through the generous support of the American people from the United States Agency for International Development (USAID), among others.

The study itself was funded through the U.S. National Institutes of Health Consortium for HIV/AIDS Vaccine Development award to Dennis Burton, Ph.D., scientific director, NAC, and professor and chair of the Department of Immunology and Microbiology, Scripps Research, as well as through BMGF. IAVI supported many of the scientists and research associates who performed the work.