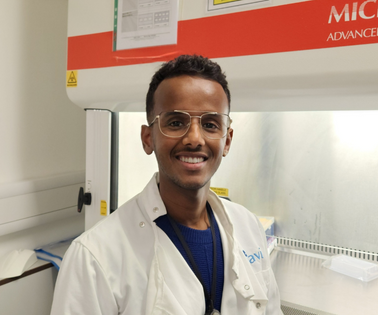 What is the current focus of your research?

I’m trying to make an HIV vaccine candidate with the aim to do an animal trial in mice. It’s a T-cell based vaccine informed by quite a few novel and exciting things that I discovered with the team during my Ph.D., enabling us to apply lessons learnt from natural HIV controllers to the design of a new vaccine. [A natural HIV controller is someone living with HIV who can control the infection long term without antiretroviral treatment.]

What are some of those discoveries that are informing the HIV vaccine candidate you’re now developing?

We were able to link the ability of an individual to control an HIV infection with a very potent early immune response in which their CD8 T cells focused on a very specific region of the virus. We narrowed this region down to just a couple hundred amino acids that were structurally important and appear to be exclusively targeted by HIV controllers. There is some evidence that suggests that a vaccine with multiple proteins may result in the targeting of decoy antigens that result in weaker responses whereas a more limited immunogen may elicit a stronger and more durable immune response. As such, we want to make a T-cell based HIV vaccine candidate that is extremely narrow and focused to try and mitigate some of the undesirable effects presented by more variable regions.

So, what’s next for your research?

Once I have made the vaccine construct, I will then vaccinate mice over 12 weeks. If the data is promising, we might be able to move on to larger animal studies, such as in monkeys, or even human clinical trials. For the HIV field, the focus is still identifying an immunogen that solves this 40-year-long mystery. Then it’s a question of leveraging the best platform to deliver the immunogen.

What is your proudest achievement so far?

During my master’s at the London School of Hygiene and Tropical Medicine I did a six-month project with Public Health England on the human papillomavirus (HPV). I continued this work post-master’s to test thousands of samples from men and women to see if there was a link between throat cancer and HPV. And we did find a link. The findings helped influence public health policy and today all boys aged 12-13 in the U.K. are also offered the HPV vaccine.

Just before COVID, I saw a poster telling men to also get the HPV vaccine for free. It brought a smile to my face because through this work we’re reducing the risk of men developing cancer too. And maybe people in other countries will also look at the publications we made and may adopt the policy and roll out HPV at a younger age as well.

How did you find yourself working in HIV vaccinology with IAVI?

I’ll be doing myself and my family a disservice if I don’t speak about all of my experiences growing up. I came to the United Kingdom when I was a child as a refugee from Somalia after the civil war broke out in the early nineties. I wouldn’t be here now if it wasn’t for everything the U.K. has given me, but early on it was really tough.

My escape used to be animals and nature documentaries — I loved David Attenborough! I used to consume them like they were water and from the age of 10 I decided I was going to become a zoologist. But as early as the age of nine I started to notice that there wasn’t anyone that looked like me in any of the nature documentaries and I remember thinking that this isn’t for me and that people like me don’t do those kinds of jobs. I think this is why representation is so important.

You’ll also see that with a lot of families from immigrant and refugee backgrounds, that your parents want you to pursue a career that will be fruitful and secure. So, when I was thinking about my undergraduate studies, I was passionate about animals and biology and in my head, the next best thing was microbiology. Initially, I did biomedical science and then for my master’s I studied microbiology.

Later, as I was finishing up my first research assistant post, my dad, who was a civil engineer, retired to Somalia. After a coalition government formed in Somalia in 2008, bringing a degree of stability, there was quite a lot of the diaspora going back to try to help the country and my dad wanted to do the same. Up to that point I was kind of disconnected from my heritage and from Somalia, so I visited the region where my dad was working and I discovered there was very little research happening due to the civil unrest, especially for HIV.

It kind of shocked me but I felt that as I’m Somali, I speak the language, and I look like the people, that if anyone could do research there, it would be easier for someone like me. I want my research to have an impact and I wanted a position within a research organization like IAVI that was actually translating science and working to transfer knowledge and technology and support the training of African scientists.

It’s still my ambition to help bring Somalia back into the wider research community. I want to be that bridge between the wider research community and what’s happening there. I want to do what we [IAVI] did in Kenya and Uganda and help facilitate the building of research centers there to do HIV research along with other global health issues and emerging infections. I want to be in Africa, working alongside other African scientists to tackle infectious diseases at the source. That’s my five- to ten-year plan. And I think I’m heading in the right direction.

How do you think we can empower the next generation of HIV scientists in the world?

I think there’s a lot of people like me out there. If you just give them an opportunity, they will take it and they will run with it and impress you and maybe even blow your mind with what they can achieve. I’m here now because people gave me an opportunity. I think we have to give young scientists as many opportunities as possible to experiment and explore within the science community.

Who’s been an important influence on your work over your career so far?

Both Julia Makinde, my Ph.D. supervisor, and Simon Beddows, my master’s dissertation supervisor, have had a massive impact on my ambitions, my way of thinking, and the way I approach science over the last eight years.

What would you like people to walk away remembering after reading your interview?

I genuinely never thought that my Ph.D. would contribute anything significant or meaningful to the field. As a student, you’re very humble. I think there’s a real issue with imposter syndrome; students tend to feel like they don’t belong at the table. But what I’ve learned is that everything you do in science, no matter how trivial you think it is, adds to the bigger picture and makes a difference.

My work now is on the cusp of possibly making an exciting HIV vaccine candidate, which is massive, and I never thought I’d do that. But even if my data doesn’t result in that, it adds to the field and helps someone else. I know it feels like there’s been a million HIV vaccine candidates, but it doesn’t mean we stop trying; we just keep at it until one works. And if it doesn’t, everything that we do contributes to the next antiretroviral treatment, prevention, or therapy. Every single thing I’ve done has led me to this point, and it’s made me who I am now. Maybe it’s cheesy, but everything counts.

Discover these other articles in the Meet the Scientist series: