New leadership program positions homegrown scientists to drive research into HIV and other infectious diseases in Africa and India. 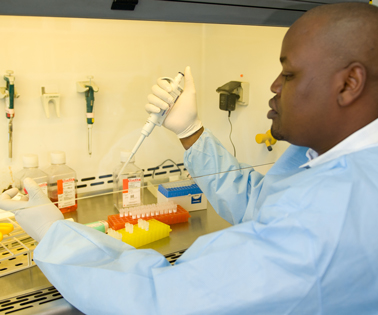 Robert Lang'at, Ph.D., post doctoral fellow at KAVI-ICR, and a participant of the Leadership Development Program.

With support from the U.S. Agency for International Development (USAID), IAVI has commenced a Leadership Development Program (LDP) that will position African and Indian scientists to take the lead in fashioning, driving, and supporting the scientific research enterprise. The new initiative will offer opportunities to early- and mid-career scientists to develop their skills to become the next generation of science leadership in their respective fields of expertise.

LDP, in its first cohort, will support 30 participants from African and Indian Clinical Research Centers (CRCs), who range from laboratory scientists to clinical trials specialists. This first cohort includes scientifically experienced participants who have run independent science projects, as well as those who have managed only parts of much larger research enterprises. The cohort also includes recently appointed postdoctoral fellows in HIV prevention research at the respective partner CRCs.

“This Leadership Development Program is important to us because we recognize that if we are to succeed in the efforts toward finding an HIV vaccine, we must support emerging leadership,” said Margaret McCluskey, RN, MPH, MPS, Senior Technical Advisor for HIV Vaccine Research at USAID. “Yes, we need great science done, but we also need people who can take it into the future,” she added.

LDP builds on the commitment by IAVI’s ADVANCE (Accelerate the Development of Vaccines and New Technologies to Combat the AIDS Epidemic) program to foster a core group of researchers and scientists in African and Indian institutions who are contributing to the global effort to identify, evaluate, and implement HIV vaccines and biomedical prevention products toward ending the HIV epidemic. ADVANCE is a 10-year cooperative agreement with USAID, through the U.S. President’s Emergency Plan for AIDS Relief (PEPFAR). ADVANCE continues to invest in African-led HIV prevention science, by working closely with a network of independent but interconnected centers of excellence, known as CRCs. This partnership emphasizes the shifting of leadership to African investigators allowing the research to be driven by Africans for Africa.

In order to develop well-rounded scientists, LDP will equip its participants with enhanced skills around nine core programs including: soft skills, scientific communication, research ethics, data analysis and tools, basics in immunology, clinical science, social and behavioral research, epidemiology, and clinical trial operations. The program will also support the participants to build their own independent scientific network and support their efforts to write grant proposals and obtain independent funding for projects.

By equipping its participants with this assortment of skill sets, the program will enable scientists to complement each other and collaborate successfully, including throughout the various stages of HIV vaccine discovery, design, and development. The participants will be trained through online lectures, with prospects for in-person sessions in early 2022. The in-person sessions will include immersive sessions and opportunities for participants to hone their presentation and communication skills, and to facilitate better networking among participants.

The ADVANCE LDP brings together an incredible faculty that will steer structured lectures and breakout discussions on scientific leadership, clinical trials, community attitudes and involvement in research, and on crafting creative and meaningful questions for the laboratory. Beyond the classroom-style lectures, the participants will each be paired with mentors. For those students preparing to write grant proposals, the program will support them with workshops and by pairing them with grant readers to work with them on-on-one on the proposals.

Significant intellectual and scientific resources and infrastructure already exist across Africa and India. LDP is built on the premise that this provides an opportunity to build a larger, more effective critical mass of research capacity that will facilitate African and Indian leadership in global efforts to end HIV and to address other pressing global health needs. LDP also prioritizes Indo-African-led science in solving the major public health challenges in Africa and India, including the converging epidemics of HIV and tuberculosis (TB).

The capacity for cutting-edge basic, clinical, epidemiological, and translational research across multiple disease areas in Africa and India remains crucial to the advancement of next-generation vaccines for HIV and TB. Such capacity is key to fulfilling IAVI’s mission to translate scientific discoveries into affordable, globally accessible public health solutions.

“It is my hope that the Leadership Development Program will steer me towards becoming an independent scientist,” said Dr. Thandeka Moyo-Gwete, Ph.D., senior medical scientist at the National Institute for Medical Institute (NICD) in Johannesburg, South Africa. “My ambition is to someday have my own lab and mentor the next generation of students, and I believe this program will be crucial in equipping me,” she added.

Through its mentorship component, LDP will prepare participants to strive for senior leadership roles within African and Indian institutions. The initiative is a critical part of the long-term sustainable growth of IAVI’s CRC partner institutions and seeks to support their growth into more self-reliant, versatile centers for critically important research including HIV vaccine research and development and training.