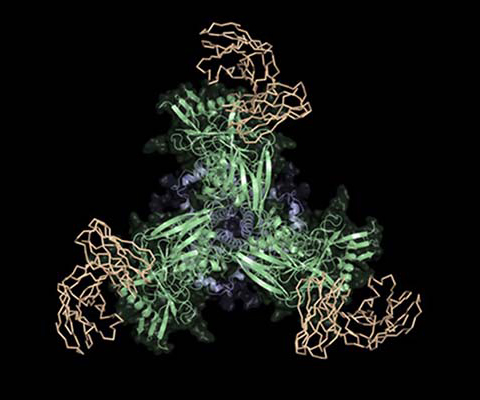 A new vaccine candidate (green and blue) that binds to precursors of HIV broadly neutralizing antibodies (tan) has promise as the first stage of an HIV vaccine. Image: Scripps Research

A collaborative team of scientists, including IAVI researchers, has made a successful proof-of-principle demonstration of an advanced HIV vaccine strategy—an approach that could also be applied to other infectious diseases.

The team, led by scientists at Scripps Research, included scientists from IAVI, the Ragon Institute of Massachusetts General Hospital, MIT and Harvard University; and the La Jolla Institute for Immunology. Their research was published in Science on October 31, 2019.

The new vaccine strategy aims to stimulate B cells of the immune system to produce broadly neutralizing antibodies (bnAbs) against HIV. These special antibodies are capable of neutralizing many different strains of the fast-mutating virus by binding to important yet difficult-to-access regions of the virus surface that don’t vary much from strain to strain.

Based on a concept called germline targeting, this novel strategy could potentially provide protection against the millions of different strains of the virus circulating globally. Achieving this goal has so far been elusive; no HIV vaccine candidate has been shown to induce a protective bnAb response in humans.

William Schief, Ph.D., at Scripps Research and IAVI's Neutralizing Antibody Center, and his colleagues previously demonstrated a germline-targeting strategy for one special case: a bnAb that attaches to HIV in an unusual way. The new approach works for a class of antibodies that grip their targets via a much more common mechanism. Analyses performed in the study indicate that the approach could also be applied to vaccines for other pathogens such as influenza virus, dengue virus, Zika virus, hepatitis C virus, and the plasmodium that causes malaria.

Much of IAVI's work on HIV antibody discovery and related immunogen design is made possible by the generous support of the American people through the United States Agency for International Development (USAID).

Read more about the study here.