IAVI recognizes USAID and the American people for their unwavering support of the development of safe, effective, accessible, preventive HIV vaccines and biomedical prevention products for use throughout the world. 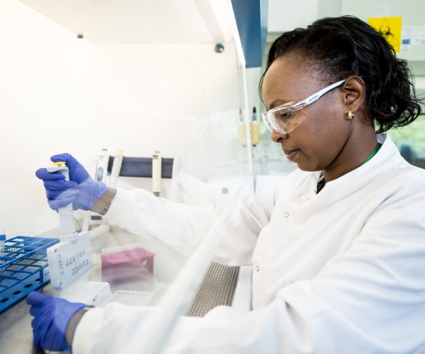 Dr. Eunice Nduati is a research scientist based at the KEMRI Wellcome Trust Research Programme (KWTRP), Kilifi Kenya. Her primary goal is to understand how certain immune cells contribute to the development of HIV-specific antibodies during infection.

IAVI recognizes USAID and the American people, for their nearly 20 years of unwavering support to drive the development of safe, effective, accessible, preventive HIV vaccines and biomedical prevention products for use throughout the world while strengthening local clinical research capacity in regions most devastated by the HIV epidemic.

This work by IAVI and its global network of partners with support from the United States Agency for International Development (USAID), through the U.S. President’s Emergency Plan for AIDS Relief (PEPFAR), remains as important today as ever. In 2017, nearly 2 million people newly acquired HIV according to the latest data from the Joint United Nations Programme on HIV/AIDS. This stubbornly high infection rate has been consistent over time, with approximately 2 million new infections occurring every year since 2005, despite tremendous progress in providing life-saving antiretroviral treatment to those already living with HIV. Experts warn that without significant progress in reducing new HIV infections, the HIV/AIDS epidemic will likely worsen as the largest generation of young people enters the age at which they are at highest risk of HIV. The world needs new ways to stop the spread of HIV, and chief among these is a preventive vaccine.

Developing an HIV vaccine and other accessible prevention products requires pioneering science, innovative partnerships, and a steadfast focus on the populations for which the disease burden is the highest. USAID’s willingness to make sustained and early investments in HIV vaccine research and development has transformed the field. The resulting data from protocols supported by USAID are now informing the next generation of HIV vaccine and prevention product candidates. With USAID’s consistent support, IAVI’s global reach has fueled fundamental contributions to understanding the epidemiology, transmission, virology, and immunology of HIV. This work plays a key role in facilitating the design of promising HIV prevention product candidates, as well as the discovery of broadly neutralizing antibodies that are now being advanced as promising prevention approaches.

This year, the IAVI DataSpace, an ongoing USAID-supported effort to facilitate data-driven research, offers researchers worldwide access to more than 30,000 banked biological samples and integrated data from at-risk populations at the center of the epidemic in Africa. Concurrently, on-the-ground linkages from civil society to governments continue to create policy and regulatory environments that enable HIV vaccine research and ensure sustained investment by countries most impacted by the epidemic.

Most recently, ADVANCE (Accelerate the Development of Vaccines and New Technologies to Combat the AIDS Epidemic), a five-year cooperative agreement with USAID, furthers IAVI’s progress of HIV research in the region. Now at its midpoint, ADVANCE builds on IAVI’s long-term partnership with USAID and capitalizes on the IAVI-fostered sustainable Africa-based research network to build self-reliance.

Vaccine development is a noble, but long-term endeavor that requires sustained funding and focus over many years. With USAID’s consistent support, a safe and globally effective vaccine to prevent new HIV infections and save countless lives is possible.