Stanley Plotkin discusses the greatest progress in vaccine development in more than half a century and the lingering barriers to an effective HIV vaccine.

The first issue of IAVI Report, published in the summer of 1996, introduced IAVI and its mission to a broad audience of scientists, policymakers, and activists who were interested in HIV vaccine research. One the articles in this inaugural issue was an interview with Stanley Plotkin, veteran vaccine developer, Professor Emeritus at the University of Pennsylvania, and expert advisor through his company Vaxconsult. 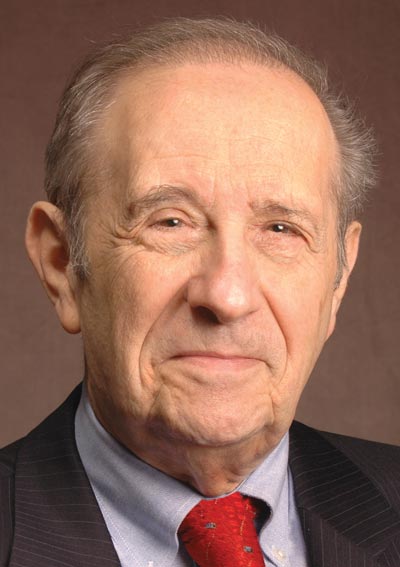 It is no surprise that the first editors of IAVI Report chose Plotkin — he’s written the textbook on vaccines. Now in its 7th edition and titled “Plotkin’s Vaccines,” it is described by Bill Gates as “an indispensable guide to the enhancement of the well-being of our world,” according to the publisher.

As IAVI and IAVI Report commemorate their 25th anniversary, I thought it wise to return to Plotkin and ask him to provide perspective on the vaccine field at large, and on the particular challenges of HIV vaccine development. When we recently spoke, he once again offered his sharp insights on this pesky pathogen and described why improving our understanding of mucosal immunology remains critical to developing a broadly effective HIV vaccine.

An edited version of our conversation appears below.

Back in 1996, we asked you, then as a representative of industry, what you thought were the major roadblocks to HIV vaccine development. How would you answer that question today? How has it changed in 25 years?

Well, obviously we still don’t have an HIV vaccine. And I don’t remember, of course, what I said in 1996, but I think the problems are both biologic and immunologic. In the 25 years that have passed, our knowledge on those issues has increased somewhat, but we have been unable, at this point, to demonstrate significant efficacy of any HIV vaccine candidate. There are two main reasons for that. One is that the virus mutates considerably, and the other is that we still have not identified the biological mechanism that protects against infection.

I don’t want to be too pessimistic because there are major projects that are making progress in identifying important immune responses and there has been some success in experimental animal models, but there is still no clinical efficacy. I guess it boils down to the fact that we know how to induce neutralizing antibodies, or complement-fixing antibodies, and several other types of antibodies, but we still haven’t identified the — if there is any — biological mechanism to eliminate HIV at the entry point, which for sexual transmission is the genital mucosa. And once the virus gets into the genital mucosa, it appears to be very difficult to prevent it from spreading. So, I’m not pessimistic, but for HIV there is still a way to go.

Just a few months ago the results from the Imbokodo trial showed that the Johnson & Johnson/Janssen adenovirus vector-based HIV vaccine candidate with a mosaic antigen was not effective. There was promising preclinical and early clinical data to support the development of this candidate. What do you think explains the failure of this candidate to provide protection in humans?

Well, I would be guessing, but I think that the important points are that the virus changes. As a result, what you’ve achieved in experimental animal studies may not translate into a situation in which people are exposed to all kinds of variants and you’re trying to protect them against all of them.

But there are other possibilities. If the challenge dose is quite high, once the virus obtains entry into the first cell, it can move from cell to cell without being exposed to immune factors that, in principle, should kill the virus.

Then is it really a question of inducing immunity at mucosal surfaces? Is it feasible to do that quickly enough to prevent HIV from spreading?

I wouldn’t say it’s not possible. But we still face the biologic problem of interfering with the virus at the earliest phase, when the virus is getting into an exposed cell on the genital mucosa. If you think about it, most of the vaccines we have operate by tamping down replication of the virus once it infects the mucosa and preventing that initial infection from spreading. It appears that in the case of HIV, once the virus gets into that mucosal cell, the mechanisms that we think should prevent it from spreading, apparently don’t, or at least don’t yet. I see that as a biological problem with mucosal infection.

And to some extent this also applies to COVID. I think one could say that the vaccines we have are excellent in preventing serious disease once the virus spreads to the lungs, but we are less able to prevent infection in the nasopharynx. And that is not an all or none phenomenon. The mRNA vaccines, which give very high antibody titers, can prevent infection, but they don’t always prevent infection. And many of the other vaccines don’t have much of an effect on blocking infection.

And when the amount of inoculum is higher, as is the case with the Delta variant, it is then harder to block infection.

Do you think it will be possible to ever induce enough of an antibody response in the mucosa to stop an HIV infection from occurring?

I don’t know that I can answer that question.

If you could, it would be helpful!

[Laughs]. I remain optimistic that an immunization regimen will be developed that will be able to prevent infection in situations in which the viral challenge dose is relatively low, and in epidemiologic situations where exposure is not constant. And, unfortunately, what that suggests to me is that we may well eventually have a measure to reduce infection in, say, gay men in developed countries. But whether we can prevent infection in a pandemic situation, such as in Africa, that’s quite a challenge. One should never be too pessimistic because there can be scientific discoveries that change the situation completely.

In the 1996 IAVI Report interview you spoke about the promise of DNA vaccines. Now we’ve seen the first nucleic acid vaccines be deployed against SARS-CoV-2. Do you foresee these platforms being applicable to other vaccine development efforts? 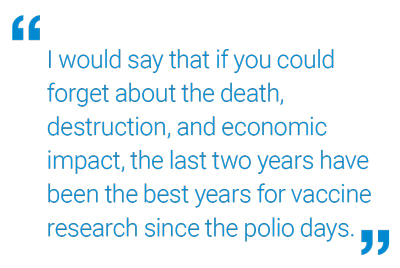 The 1990s, in retrospect, were a time of scientific exploration that changed the world of vaccines. In the 1990s, as you say, nucleic acid research was just beginning, both for DNA and for RNA, and for viral vectors. I remember very well at Sanofi we were testing poxvirus vectors for HIV. And although they didn’t work out, it nevertheless made the point that you could use a non-replicating viral vector to carry genes from other agents and as time went on, that became more and more feasible.

People talk about how quickly the mRNA vaccines were made but they don’t take into account the 20 years of research that went into that field before it became practical. My memory of the 1990s is that there was really a lot of excellent basic research which allowed us to do things in 2020 that were not possible before. Fortunately, for us. I would say that if you could forget about the death, destruction, and economic impact, the last two years have been the best years for vaccine research since the polio days.

Do you think the flu vaccine will be improved using the mRNA platform?

I certainly hope so! If we’re honest, we are lucky when the flu vaccine protects 50% or so of people. Although the existing flu vaccines work pretty well in children, they are only moderately effective as far as adults are concerned. Some years they’re really not terribly useful, so yes, I have great hopes for improving influenza vaccines.

What are the areas of basic research that should be prioritized now?

One point is that we need a lot more information about preventing mucosal replication. I think that is a weak point of our vaccines.

Another point is that we are always looking for neutralizing antibodies, and that’s obviously important, but, in a way, it is an artificial test. We take a measured amount of virus with a measured amount of anti-serum, and we put that together and see how much virus comes out. That doesn’t really mimic what happens in nature. My point here is that we are discovering immune functions that were not obvious or visible before — immune functions that don’t depend on this test tube neutralization but are biological means by which the body tries to deal with the invasive agents, so-called Fc-effector antibodies and cellular responses, which are not simply proliferation of cells in the presence of an antigen. My prediction, which is sort of obvious, is that we will eventually be testing many more immune responses that play a role in protection than we do now. And that will enable us to improve our vaccines.

I have been one of many that have been working on immune correlates of protection for COVID vaccines and that work has basically shown that neutralizing antibodies are an excellent correlate for protection, but as I always say when I talk about this subject, there is a hierarchy. Clearly, neutralizing antibodies are number one. But there are other things going on that add to that protection. If you have high antibodies, it doesn’t matter. But if you have low antibodies, those other functions help. The immune system has been designed to be redundant. We try to simplify things, but that doesn’t mean there aren’t other things going on that are more difficult to measure.

In 2015, Jeremy Farrar, Adel Mahmoud, and I wrote an article proposing the development of an agency that would deal with diseases that don’t have commercial prospects. Eventually that led to CEPI [the Coalition for Epidemic Preparedness Innovations], which was designed to deal with epidemics and with Disease X — that is whatever disease that would come along that we don’t know about. CEPI is now sponsoring a number of COVID vaccines, but is also still looking at the unknown, SARS-3, so to speak. I think that is also an extremely important area of research in the world of vaccines.

We’re living through a disaster but, on the positive side, I think it’s safe to predict that the knowledge that is being generated will help us deal with many other diseases.