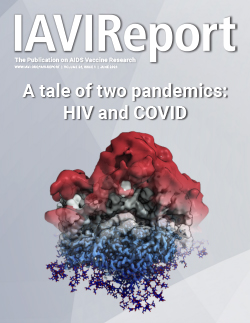 The last time I penned a letter in this publication, nearly a year ago, I closed by saying: “If science is our best hope, we are in good hands.”

That certainly proved to be the case. There are now three authorized COVID-19 vaccines in the U.S., and seven that have received an Emergency Use Listing by the World Health Organization, which is a prerequisite for the vaccines being eligible for global distribution though the COVAX facility. The speed with which these vaccines were developed, and how effective they are at preventing severe disease and, in many cases symptomatic infection altogether, is a truly impressive illustration of the power of science.

In countries with high vaccination rates, SARS-CoV-2 infection rates are largely plummeting. Vaccines have once again proven to be one of the most efficient and effective ways to stop the spread of infectious diseases.

But the virus is striking back — the highly transmissible Delta variant is on the move. The greatest threat is to those who are unvaccinated, and this is still a large proportion of the world’s population. Despite efforts to distribute vaccines equitably, global access remains extremely unbalanced. The race is on to vaccinate more of the world’s population before an even more transmissible and deadly variant emerges.

In this issue, I spoke with Dr. John Nkengasong, director of the Africa Centres for Disease Control and Prevention, on the slow rollout of COVID vaccines in Africa and how he thinks the continent should prepare for future pandemics.

Other voices featured in this issue are those of four leading HIV researchers who are lending the knowledge and experience they’ve honed over the now four decades of HIV/AIDS work to COVID vaccine research. Their efforts are inspiring.

It isn’t news to our readers that developing an HIV vaccine is a far more difficult challenge than developing COVID vaccines. But there is some good news: scientists are making progress on the arduous path to triggering immunity through a stepwise process referred to as germline targeting.

The past year was devastating. But in some ways, we were lucky. The next new virus to infect and kill humans may not be as easy to develop a vaccine against. Should the next pathogen embody the worst of HIV and SARS-CoV-2, the result would be almost unimaginable. But then too, science will be our best hope. And given the elegant science that is underway and the limitless imagination of researchers, I still think we’ll be in good hands.