In the midst of a pandemic and preparing for the next

SARS-CoV-2 is the first Disease X. There will certainly be others. Will the world be better prepared for the next one?

Peter Piot is only a few months into his recovery from COVID-19. But even as the pandemic rages on, he is already thinking ahead to the next one.

“We need to plan for the next epidemic now. This is the time to make sure we don’t commit the same mistakes in not investing in epidemic preparedness,” he said at the virtual COVID-19 Conference, part of the International AIDS Society’s biennial conference.

Piot, director of the London School of Hygiene and Tropical Medicine and a widely known epidemiologist who was among a group of researchers that discovered Ebola virus, spent a week in the hospital in mid-March after becoming infected with SARS-CoV-2, the coronavirus that causes COVID-19. Even a month later it still left him breathless to climb a flight of stairs.

But by mid-July Piot was well enough to advise the research community, and his advice was to take a long-term view. Piot has described long-term epidemic responses before, as when he joined the editorial board for the journal AIDS (AIDS 26, 1199, 2012). Long term, Piot thinks the world will be living with SARS-CoV-2, while also facing other now-unknown pandemic threats. These threats are referred to as Disease X, an uncharacterized but potentially deadly pathogen that finds its way into humans and spreads. SARS-CoV-2 is the first Disease X, but there will be more.

The Disease X concept sprang into being during the 2014-2016 Ebola outbreak in West Africa, says John-Arne Røttingen, chief executive of the Research Council of Norway and a member of the World Health Organization’s (WHO) scientific advisory board for its research and development initiative, the R&D Blueprint. In 2015 as part of its analysis of what was happening before and during the Ebola outbreak, WHO set out to try to prepare a list of pathogens with the potential to cause major international public health emergencies. These pathogens were considered priorities for vaccine development. Added to this menacing roster—amid viruses like Hendra, Nipah, and the coronavirus that causes Middle East Respiratory Syndrome (MERS)—the Disease X was placed as something like a wild card.

The R&D Blueprint eventually led to the 2017 launch at the World Economic Forum in Davos of CEPI, the Coalition for Epidemic Preparedness Innovations, a grant-making, nonprofit organization which funds basic research and early clinical vaccine trials aimed at developing a reserve of potential vaccine candidates against a set of epidemic-prone infectious diseases—selected from the R&D Blueprint roster— that can be developed quickly in the event of outbreak (Science 350, 170, 2015; A Crisis Gives You Wings, IAVI Report, Vol. 21, No. 1 2017).

CEPI was inspired by the pathway that led to vaccines against Ebola, one of which is now licensed (ERVEBO); the other, a two-component vaccine (Zabdeno and Mvabea) was recently approved for marketing by the European Commission. Though these did not come from CEPI, what became ERVEBO made use of a pre-existing candidate that had laid dormant for years until the West Africa outbreak once again drew attention to the virus.

CEPI started by investing in efforts to develop vaccine against MERS, Nipah, Lassa, Rift Valley Fever, and Chikungunya viruses. When SARS-CoV-2 arrived—and fit the bill as Disease X—they quickly funded several vaccine efforts against this virus, including development partnerships with CureVac, Inovio, Insitut Pasteur, Novavax, the University of Oxford, Moderna, the University of Hong Kong, and the University of Queensland. 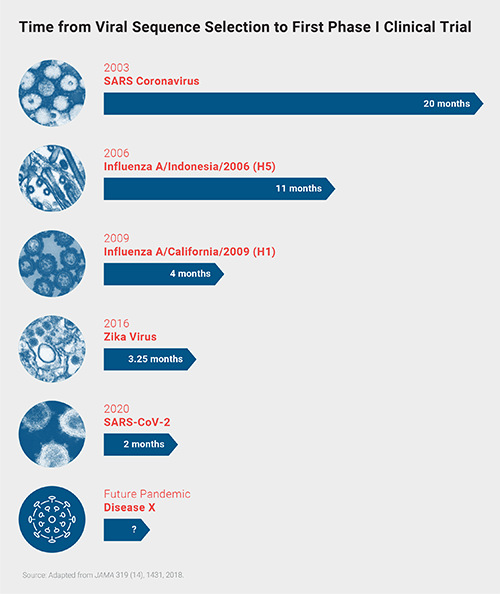 Since 2003, when SARS-CoV-1 first emerged, the response to emerging viral pathogens has become much faster. But experts still see room for improvement before the next Disease X hits humans.

The WHO convened an R&D summit in Geneva in mid-February at which the group took stock of available knowledge and identified common research areas. These are the kind of measures CEPI’s Nicole Lurie, a former U.S. Assistant Secretary for Preparedness and Response, says are vital to what in her view is a new era in vaccine development, one that can meet a Disease X—or even two Disease X’s at once, or a Disease X and a flu outbreak at the same time. In “Developing COVID-19 Vaccines at Pandemic Speed,” Lurie lays out a vision of ideal vaccine platforms that can support development from viral sequencing to clinical trials in less than 16 weeks, alongside capabilities for boosting and accelerating manufacturing capacities, putting funding in place, and running multiple clinical trial phases at the same time, all in parallel (NEJM 382, 1969, 2020).

The Blueprint group also developed and promoted similar steps, such as laying the groundwork to quickly launch large-scale, flexible clinical trials for therapeutics. “The Blueprint mechanisms had already started working on coronavirus by early January,” Røttingen says. “It is the first clearly defined new pathogen, Disease X, and the general protocols for clinical trials were being worked into more specific therapeutic clinical studies.” The SOLIDARITY trial, a flexible, so-called adaptive multi-armed trial of COVID-19 therapies launched in mid-March.

Lurie sees this as the beginning of what she describes as a new “pandemic paradigm,” with Phase I trials and animal studies taking place simultaneously and investments flowing into producing vaccine doses even before they are proven to work. But considering a future that may well produce another Disease X, Lurie emphasizes the need for investing in better and speedier manufacturing technologies and creating global systems for mobilizing resources and finances.

Lurie describes preparedness—against a future Disease X and all kinds of hazards—as a continuous activity, one requiring a research plan (NEJM 368(13), 1251, 2013). For now, it’s important to figure out how to get experimental vaccines and therapies to trial sites during the ongoing pandemic and utilize existing trial networks. “They need the capability to stand up pretty quickly,” she says.

As seen on a smaller scale during the Ebola outbreak, when some of these techniques proved effective, adaptive trials are an important component of an emergency response. As is proving the case with COVID, a pandemic fluctuates. Researchers have already fretted about this in the U.K. and in parts of the U.S. and China, only for those concerns to dissipate as infection rates spike. A clustered trial can be designed to adapt to fluctuating infection rates. The SOLIDARITY trial is doing this, Røttingen says: it started out early on in Europe, but as rates have waned there, most of the recruitments shifted to Asia and Latin America. The network now extends to Iran, Indonesia, Philippines, India, and several South American countries.

It’s already possible to see measures in place in the race against COVID-19 that will be used for future preparedness. Much of this has to do with scientists rapidly mobilizing to develop vaccine candidates, antibodies, and drugs, and testing them in adaptive clinical trials in record time. Only when the next Disease X comes, Piot says the response will have to be better than what happened with COVID. “When you look at the international rankings of countries in terms of epidemic preparedness, those who were at the top have done the worst.”

“This is a wake-up call. I think all countries will increase their own investments in their national preparedness and response capabilities,” Røttingen says. “I hope they will be willing to invest in collective mechanisms, because that is needed. And we should definitely plan for a pandemic influenza.”