Turning the tide on TB?

A slew of potential advances in treating and preventing tuberculosis offers new hope in the battle against one of the oldest human afflictions.

The last two years were a watershed moment in the fight against tuberculosis (TB). Encouraging results from vaccine trials, a newly approved treatment, and increased global attention suggest the world may be inching closer to tackling this ancient bacterial disease. And not a moment too soon.

According to the World Health Organization (WHO), TB is the deadliest infectious disease on the planet. Last year it killed 1.5 million people. Over the past 200 years, TB has claimed the lives of more than a billion people—that’s more than malaria, influenza, smallpox, HIV/AIDS, cholera, and plague combined (Nature 502, S2, 2013). In 2018, an estimated 10 million people acquired the disease, four million of whom don’t even know they have it.

“Tuberculosis has been a huge burden on humanity,” says Eric Goosby, the United Nations special envoy on tuberculosis and a professor of medicine at the University of California, San Francisco.

One reason TB is such a burden is that it is ubiquitous. A quarter of the world’s population is estimated to be infected with Mycobacterium tuberculosis (M.tb), the causative agent of TB. The infection can either progress to active TB disease or lie dormant, a state known as latent TB, indefinitely. People with latent TB infection cannot pass the airborne bacteria to others and are not sick, but they are at a 5%-10% life-long risk of developing active TB disease. “The association between exposure and disease is so delayed, it makes it very difficult to contain,” says Goosby. For those who are immune compromised, including, among others, pregnant women and HIV-infected individuals, the risk of developing active disease is much higher, according to the U.S. Centers for Disease Control and Prevention.

Writing recently in The Guardian, Tedros Adhanom Ghebreyesus, director-general of the WHO, noted that the world has not made much progress against TB since 1993 when a third of the world’s population was infected with M.tb and the WHO declared the disease a global emergency (The Guardian, Why is the world losing the fight against history’s most lethal disease? Nov. 14, 2019). “Why, despite all the progress in medicine and public health over the past 150 years, is TB still the most common and lethal of all infectious diseases?” he asks.

It’s a good question. Studies suggest that M.tb began spreading among humans nearly 6,000 years ago (Nature 514(7523), 494, 2014), making it one of the oldest human afflictions (Clin. Microbiol. Rev. 16(3), 463, 2003). And it was back in 1882 that Nobel Prize winning scientist Robert Koch first identified the bacteria as the causative agent of TB. Yet the only licensed TB vaccine was developed nearly a century ago and many of the drugs used to treat TB infection were developed more than 50 years ago, need to be taken for a period of six months, and are less effective against the increasingly prevalent drug-resistant strains of the bacteria that are now in circulation. This is why the WHO identifies “intensified research and innovation” as one of the pillars of their “End TB Strategy,” which aims to end the TB epidemic by 2035. While this may seem an ambitious goal, recent progress may help turn the tide against TB.

The only existing TB vaccine was developed by French scientists Albert Calmette and Jean-Marie Camille Guérin and is referred to as BCG (Bacille Calmette-Guérin). This live attenuated TB vaccine is still given to infants and children in endemic countries, and while it is effective at preventing life-threatening cases of TB in infants, protection is variable against pulmonary TB in all age groups. Pulmonary TB is the most common form of the disease and the one that is contagious.

But a recent study is breathing new life into this old vaccine. Results of a Phase II study published in 2018 show that adolescents who were re-vaccinated with the same BCG vaccine they received as infants were 45% less likely to have a sustained TB infection (N. Engl. J. Med. 379(2), 138, 2018). This has sparked interest in re-vaccinating adolescents as a strategy for TB control. The Bill & Melinda Gates Medical Research Institute, a non-profit biotechnology organization funded by the Bill & Melinda Gates Foundation, launched a follow-up study in October to try to replicate these findings. The Phase II trial is enrolling 1,800 BCG-vaccinated, healthy adolescents between the ages of 10 and 18 at five study sites in South Africa. The trial is designed to determine the efficacy, safety, and immunogenicity of this revaccination approach.

In November, researchers, policymakers, public health workers, and advocates who gathered in Hyderabad, India, for the 50th Union World Conference on Lung Health had other reasons to be encouraged. The final results from a Phase IIb trial of GSK’s adjuvanted TB protein vaccine candidate, referred to as M72/AS01E, were presented there. These results showed that the vaccine candidate was 50% effective at reducing the incidence of pulmonary TB disease over a three-year period (NEJM doi:10.1056/NEJMoa1909953). These efficacy findings are consistent with an earlier analysis of the data that was published in September 2018 (NEJM 379, 1621, 2018). Although only partially effective, this vaccine candidate is the first to show protection against the development of active disease in people who are already TB infected, and many in the TB field were buoyed by these findings.

The Phase IIb trial of M72/AS01E was conducted in three sub-Saharan African countries—Kenya, South Africa, and Zambia—and involved over 3,500 volunteers between the ages of 18 and 50 with latent TB. The trial was sponsored by GSK and conducted in partnership with IAVI.

The vaccine candidate contains an M72 recombinant fusion protein that was derived from two M.tb antigens combined with GSK’s AS01 adjuvant, which is also a component of both their malaria vaccine, Mosquirix™, and their shingles vaccine, Shingrix™. The mechanism of protection for M72/AS01E is unknown, but samples collected during this study may help identify immune markers that correlate with protection against the development of active TB disease. Such findings could help advance development of this vaccine, and others.

“We really haven’t had anything that was very promising the last several decades though we’ve had other vaccine candidates, so it was very encouraging to see the results of the M72 trial,” says Soumya Swaminathan, chief scientist at the WHO. “It was the first time that a significant amount of protective efficacy was seen, and in a post-infection population, so I think it gives everybody a little hope. Although there are still many questions around this vaccine and how it could be used and in what populations, this at least it gives us enthusiasm for moving ahead.”

In fact, when the WHO outlined the preferred product characteristics, or PPCs, for new TB vaccines, the agency specified that although mathematical modelling studies suggest that a vaccine with relatively low efficacy could still be cost effective, a vaccine that was at least 50% effective for a period of two years would help achieve the ambitious END TB Strategy goals. 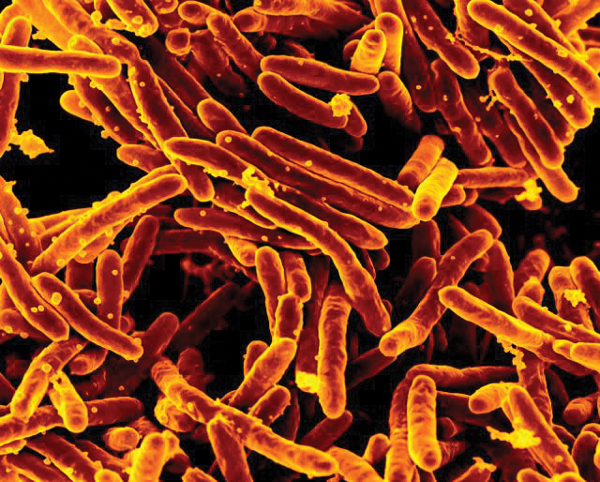 Swaminathan and Goosby were among dozens of TB experts on The Lancet Commission on tuberculosis that published a report in March 2019 detailing what they see as a path to a tuberculosis-free world (Lancet 393, 1331, 2019). “These encouraging results need to be validated and extended, particularly in different geographic situations, but despite challenges, the scientific prospects for developing a safe and effective vaccine to prevent tuberculosis are promising. Long-term and sustained investments will be necessary … but the returns even from a partially effective vaccine would be very great,” the commission’s members wrote.

Swaminathan says the WHO convened two meetings soon after the initial M72/AS01E results became known to try to quickly advance the field. “We really wanted to bring a sense of urgency to this,” she says. “The global research community really needs to come together and prioritize further work on this vaccine and work with the developer and other stakeholders, particularly the countries with the highest burden of TB.”

The collaborative model Swaminathan sees as best to drive TB vaccine development involves multiple stakeholders. “We must explore a new model where there is broader participation than just the traditional funders. Traditional funders are definitely needed to back up this development process, but I think there’s an opportunity to explore other options, including bringing other manufactures on board that could produce a product at an affordable cost, and involving ministries of health and patient groups to discuss how this vaccine would be deployed.” She also thinks that middle-income countries such as Brazil, Russia, India, China, and South Africa, the so-called BRICS nations, which have a high burden of TB disease, could provide significant investments, whether it be in research, development, or implementation science. “These countries have the capacity to contribute,” she says.

While the next steps for the M72 vaccine candidate are being formulated, other institutions are also stepping up efforts to support TB vaccine development. At the end of September, the U.S. National Institute of Allergy and Infectious Diseases (NIAID), part of the National Institutes of Health, announced US$30 million in funding to establish new centers for TB immunology research. These three Immune Mechanisms of Protection Against Mycobacterium tuberculosis (IMPAc-TB) Centers will work to develop a better understanding of the immune responses required to prevent initial infection with M.tb, establishment of latent infection, and transition to active TB disease. The goal of this work is to guide the design and development of new and improved vaccine candidates. The three centers are the T.H. Chan School of Public Health at Harvard, the Infectious Disease Research Institute (IDRI), and the Seattle Children’s Hospital.

“Without an effective vaccine we are always going to be chasing TB,” says Goosby. “It is essential for eradicating TB from the planet.” He also notes that combatting TB is integral to expanding access to health care through the Universal Health Coverage (UHC) agenda. “You will not be able to implement UHC if you don’t address TB and HIV.”

Better TB drugs are also urgently needed and are finally starting to be approved. In August, the U.S. Food and Drug Administration (FDA) approved a new drug called pretomanid, developed by the not-for-profit TB Alliance, as part of a three-drug combination for the treatment of extensively drug-resistant or multi-drug-resistant TB. The other two drugs in the so-called BPal combination are Johnson & Johnson’s bedaquiline and linezolid.

Pretomanid was only the third new TB drug to reach the market in half a century, and it is the first to be developed and registered by a non-profit organization. Following the FDA approval, the TB Alliance announced an agreement with generic drug manufacturer Macleods Pharmaceuticals Limited to manufacture pretomanid as part of the BPal combination. Macleods intends to commercialize the medicine in 140 countries and territories. The drug is also currently being considered for approval by the European Medicines Agency and is being reviewed by the WHO for inclusion in its policy guidelines on TB treatment. The big question then will be implementation.

These advances in drug and vaccine development, together with a renewed sense of urgency from the global public health community, are offering new hope for defeating the world’s deadliest infectious disease. As Goosby and Michel Kazatchkine, special adviser to the Joint United Nations Programme on HIV/AIDS (UNAIDS) for Eastern Europe and Central Asia, wrote in a STAT op-ed in March 2018: “This is doable, but by no means easy.”