Stopping HIV where it starts

Marianne Mureithi is part of a team of researchers that just received highly competitive funding to study mucosal immune responses to HIV in Kenya.

Marianne Mureithi wants to go back to the beginning. The goal, of course, is developing an HIV vaccine, but Mureithi, chief research scientist at the KAVI Institute of Clinical Research (KAVI-ICR) at 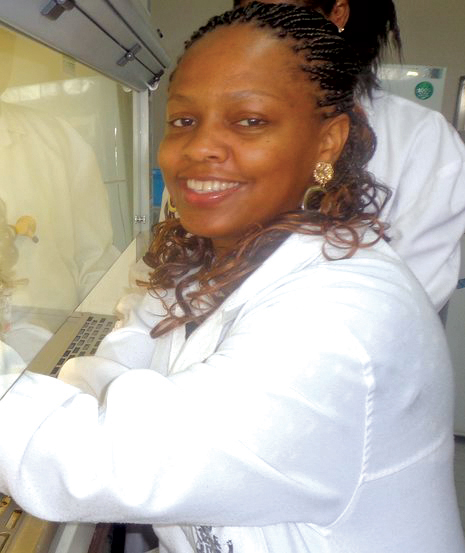 the University of Nairobi, and her partners are convinced that to achieve this goal, they must first understand the earliest moments of HIV transmission.

For women in Africa, who represent more than half of new infections on that continent, this means studying, and visualizing, the mucosal tissues of the vagina and cervix and the immune responses that originate there, where the body’s cells first come into contact with the virus following sexual transmission. This requires developing a deep scientific understanding of the mucosal environment of the female genital tract and the immune cells there that can be recruited or stimulated.

This is the focus of Mureithi’s research since she returned to her home country of Kenya after completing her undergraduate and doctorate studies abroad. It wasn’t a given that Mureithi would return to Kenya after completing her Ph.D. studies at the University of Bristol, U.K., and a joint post-doctoral research appointment at the Ragon Institute of Massachusetts General Hospital, MIT and Harvard, and the University of KwaZulu-Natal in South Africa. Like many young African scientists, she was unsure if she would find the right research project and sufficient funding there.

But in 2010, during her post-doc, she attended a scientific conference in the U.S. where she met the inimitable Professor Omu Anzala, who heads KAVI-ICR. “When he realized I was Kenyan, he said, ‘You know, Marianne, you can come back to Kenya and do this science.’” When she was next in Nairobi over the Christmas holiday, she met Anzala again and this time toured KAVI-ICR. He was persuasive, and the facilities and staff were impressive.

By the end of 2012, she was working in Nairobi. Further strengthening her ties to home, she met the man she would marry soon after her return. Now, eight years later, Mureithi has a busy and rewarding professional and personal life. She is a lecturer and research scientist in the Department of Medical Microbiology at the University of Nairobi School of Medicine, and is conducting research at KAVI-ICR with advanced tools and skilled collaborators across the world. She is also a mother of seven-year-old twins and a four year old.

At the end of March, Mureithi and her international collaborators received funding from the U.S. National Institutes of Health (NIH) for a Research Project Grant, or R01, to study the crucial initial steps of HIV infection in the mucosal tissues that line the female reproductive tract, and to characterize factors that enable or inhibit HIV transmission and dissemination. This highly competitive grant funding will allow Mureithi and her colleagues to expand the scope of their ongoing work. Securing international research funding is also an important step in Mureithi’s career. 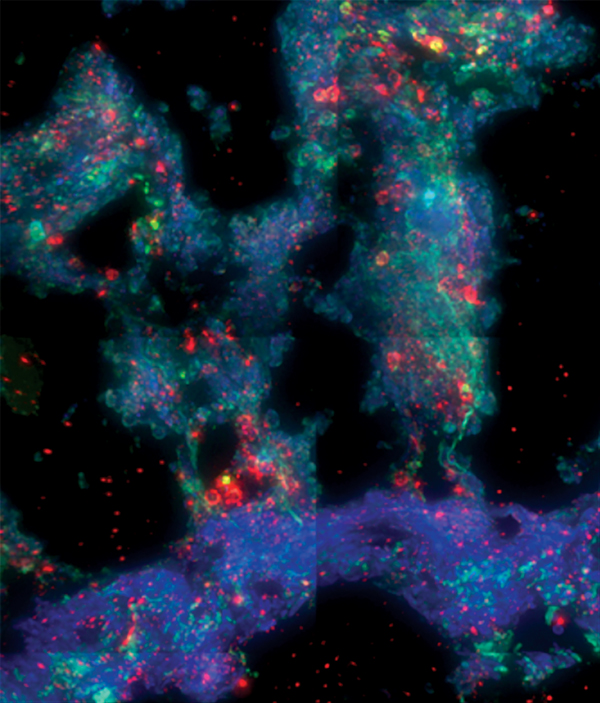 Mucosal imaging: Immunofluorescence staining of a human rectal biopsy explant after infection with a clade C HIV. The staining reveals the localization of CD4 (red), CD3 (green), and cell nuclei (blue). Abundant CD3+, CD4+ helper T cells, the primary target of HIV, remain in the tissue after 14 days in culture with HIV. Image provided by Robert Langat of KAVI.

The principal investigator of the project is Thomas Hope, professor of cell and molecular biology at the Feinberg School of Medicine and professor of biomedical engineering at the McCormick School of Engineering at Northwestern University. Hope is one of Mureithi’s mentors. “The team there at KAVI is really good and their capability as a facility is great,” says Hope. “Marianne is a fantastic younger scientist. I think she is the future of AIDS research in Nairobi.”

Mureithi was initially surprised to receive funding for her team’s first R01 submission. “We didn’t expect a high score, but, still, we spent a lot of sleepless nights putting this proposal together,” she recalls. “When we got the responses, the reviewers were very, very enthusiastic about our work, and they were attracted to the collaboration between KAVI, the University of Nairobi, and Northwestern.”

The project with Hope’s team has multiple aims and involves studying tissue, mucus, and microbial samples from volunteers in Kenya and the U.S. “It’s very clear that there are these signatures of inflammation in the female genital tract that predict HIV acquisition,” says Hope. “We need to understand where these signals are coming from and then what are the consequences—what are the changes they induce or reflect that lead to increased risk of infection?”

It is also becoming clear that many factors, including age, contraceptive use, diet, menstrual cycle events, and vaginal mucus may play a role in HIV transmission. “Our experience shows us that even mucus has a role, either to hasten transmission of the virus or to slow it down. We want to understand how it slows transmission down, and how we can influence the mucosal environment to slow it down even more to prevent infection,” says Mureithi.

There is also evidence that the microbiome likely plays a role. These are all elements Mureithi and the team plan to study further. As part of the pilot phase of the research, her team has collected samples from about 15 volunteers between the ages of 35 and 55. So far, emerging data suggests there may be some potential differences in the samples collected from Kenyan volunteers as compared to the samples Hope’s group obtains from U.S. volunteers. These differences could be due either to the virus, which in Kenya is predominantly clade C, or the host.

“What the consequences are of these differences we can’t say yet,” Hope says. “We’re just getting started here. All of these are important questions we need to probe.”

In one arm of the study, currently in pilot phase, the teams are collecting tissues from women who have had hysterectomies at Kenyatta National Hospital in Nairobi. A nurse from Mureithi’s research team waits outside the surgical theater to accept the tissue from the surgeon and transports the samples directly to the lab. Mureithi’s research scientists then introduce HIV into the tissue and observe the ensuing cellular events. Due to the fragile nature of the tissues, the team has about a 12-day window to work with each sample before it degrades.

Although experiments on HIV transmission and dissemination in non-human primates are informative, these human samples are critical. “The human experiments, ideally, have to be done in the places where it matters—where the HIV infection rates are highest and where the clades and the tissues match up,” says Hope. “The only way for me to really accomplish that is to do exactly this: build capabilities and collaborations, first in South Africa and now in Kenya.”

Mureithi and her team capture images of how HIV infects and spreads through the tissue samples using a deconvolution microscope, one of few in Africa. The microscope, along with complex mathematical modeling software that Hope’s team has developed, allows the researchers to measure the kinetics of viral transmission and the distance viral particles travel from the initial site of infection. The Kenyan team has developed software to share videos of this process with the Northwestern team.

Mureithi and Hope both credit the team’s access to the deconvolution microscope with kickstarting the research that led to their R01 grant funding from the NIH. “The key moment was when we got approval from USAID [the U.S. Agency for International Development] for them to purchase a microscope to be housed there at the University of Nairobi. I’d been trying for years to get the microscopes we used into Africa, and in 2017 I finally got one moved from Bangkok that was originally supported by the Bill & Melinda Gates Foundation,” says Hope. “Then IAVI helped us to get the equipment set up in Nairobi, and the research took off from there. I think this R01 grant is an example of what can be leveraged from these investments by USAID and IAVI.”

Mureithi is also grateful to Margaret McCluskey, senior technical advisor on HIV vaccines at USAID, for introducing Mureithi to Hope’s team, which pioneered new uses of the deconvolution technology. “Her vision was for Tom and the KAVI team to grow together to look at the earliest events following HIV transmission,” says Mureithi. “Through this collaboration we’re learning a tremendous amount from each other—I’ve sent some of my young scientists to be trained at Tom’s lab, and he’s sent some of his scientists here.”

The access to equipment and other resources still varies; for example, Hope’s team has a positron emission tomography (PET) scanner they can use to study viral dynamics in multiple tissues simultaneously, a technology that is yet unavailable to Mureithi’s team. Still, she says, “The goal of USAID is that our teams will someday be on par, and I think through these kinds of collaborations that can eventually happen.”

In addition to her research activities at KAVI, Mureithi teaches undergraduate, medical, and Ph.D. students. She uses her teaching platform to impress upon her students that the research happening in Kenya may eventually lead to an HIV vaccine. She even invites students to her monthly research meetings and is gratified that more and more students are attending. 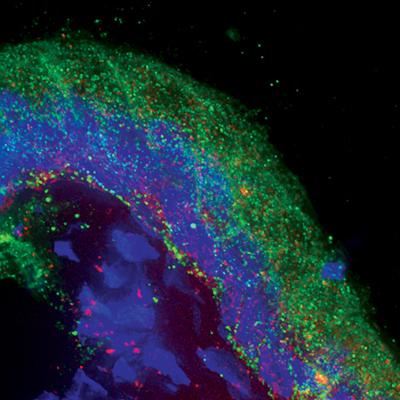 Mureithi particularly enjoys working with Ph.D. students. She recalls that at the beginning of her appointment at the University of Nairobi, there were not many other Ph.D.-level scientists to supervise graduate students. “Now we have more scientists and more capacity to mentor.”

She hopes these efforts will help convince young scientists to stay in Africa and to pursue their careers where their expertise is much needed. Mureithi also welcomes scientists from other countries to pursue their research and teaching in Kenya. “These links and networks with other researchers will help our young scientists develop in their own research, be exposed to more funding opportunities, and have more opportunities to write grants,” she says.

If you look at her life from the outside, she acknowledges her days might appear quite hectic. “I am a full-time lecturer, I write exams, I conduct research, I write grants, and I go to conferences. And don’t forget, I’m also a mother: I have three children who are under 10 years old! It is a lot.” Yet Mureithi, who always has a ready smile, doesn’t dwell on her busy schedule. “I’m not a one-woman show. We have a fantastic team, and I have a fantastic mentor in Professor Anzala. I can cascade his mentorship to my team in the lab, and we all benefit. Occasionally it feels like all the balls are dropping, but that’s the exception, not the rule.”

In spite of the demands on her time and the challenges of keeping African scientists in Africa, Mureithi sees a bright future for herself and other researchers on the continent. “We have African problems that need African solutions. The more brains we have here working on the problems, the more progress we’re going to make on the HIV prevention front.”