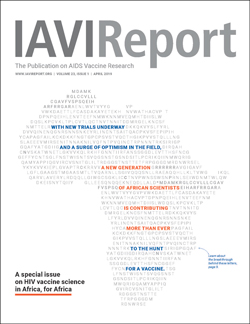 In 2007, I was in Cape Town to attend a symposium on the challenges of global vaccine development. At that meeting, and during my visits to nearby clinical research centers, the mood was somber.

Just weeks before, two HIV vaccine efficacy trials, known as STEP and Phambili, had ground to a halt. These trials were testing two variations of a viral vector-based vaccine candidate, developed by the pharmaceutical company Merck, which were largely viewed as among the most promising in development at the time. They were stopped mid-course for futility. Subsequent data suggested the vaccine candidate may have even enhanced the risk of HIV infection in a specific subset of volunteers. I interviewed dozens of researchers at that time, including IAVI’s President and CEO Mark Feinberg, who was then with Merck. One of the dominant sentiments was that the field needed to go back to the drawing board.

Fast forward 12 years and there is an unbridled sense of optimism in the HIV prevention field, primarily due to scientific progress. There are now two vaccine efficacy trials and an efficacy study of antibodies for HIV prevention ongoing, all of them in Africa. There is also a new generation of HIV vaccine candidates entering clinical trials. These candidates harness the tremendous insights into natural infection and the development of broadly neutralizing antibodies that have been garnered during the last decade.

There is also significant progress on another front—the increasingly prominent role African scientists are playing in the quest to develop an HIV vaccine. Much of this progress is the result of a sustained effort by IAVI, through its decades-long partnership with the U.S. Agency for International Development (USAID), to nurture scientific talent on the African continent. This is the focus of IAVI’s ADVANCE (Accelerate the Development of Vaccines and New Technologies to Combat the AIDS Epidemic) program, a five-year cooperative agreement between IAVI and USAID through the U.S. President’s Emergency Plan for AIDS Relief, which is investing in African-led HIV prevention research. That is the theme of this issue.

It is the first issue of IAVI Report we’ve ever dedicated to a single topic, and it is an important one. Margaret McCluskey, senior technical advisor for HIV vaccines at USAID, and her USAID colleagues Benny Kottiri and Samantha Luffy, wrote this in a recent email: “Upon recent site visits to the clinics and labs in East and Southern Africa, we have been deeply inspired by the elegant science being produced by the young scientists and their dedicated mentors. Thank you for considering our request to dedicate a special edition of IAVI Report to the extraordinary scientific capacity being built under ADVANCE.”

To glimpse this, I attended a recent ADVANCE meeting in Lusaka, Zambia. What I heard at this meeting was that a notable transformation is underway. Not only is the mood more ebullient today, there is a cadre of passionate and talented young and mid-career African scientists who are contributing to HIV vaccine development more substantially than ever before. Some of their research is featured in this issue.

When I visited the Zambia Emory HIV Research Project (ZEHRP) clinical research center in Lusaka and sat in the reception area with more than a dozen women enrolled in the ongoing HVTN 705 vaccine efficacy trial, I was reminded of the necessity of an HIV vaccine. It isn’t just about overcoming scientific obstacles or altering the statistics; it is about these young women and others like them. It is about striving to someday give them a long-lasting, affordable, non-stigmatizing vaccine that can protect them from HIV infection. It is about finding a way to make it possible that their children, some of whom were strapped to their backs at the clinic that day, can live in an AIDS-free world.

Today, more scientists in the countries most affected by HIV/AIDS are working to make that possible. That should inspire optimism too.