A new generation of HIV vaccine candidates is poised to enter clinical trials in the coming weeks and months, and these candidates are fundamentally different from those developed and tested in the past. These candidates are the result of a decades-long effort to understand the biology of HIV transmission and the nature of the immune responses mounted against the virus. While empiric-based approaches have dominated HIV vaccine development in the past, the vaccine candidates now entering human trials are designed based on hypotheses about how best to elicit specific immune responses, particularly broadly neutralizing antibodies. Scientists widely agree that inducing these broad and potent antibodies would be the best means of conferring protection against this virus and are pursuing multiple paths to achieve this goal.

The road to designing these vaccine candidates started with two key milestones—successfully engineering stable proteins that mimic the trimeric structure of HIV Envelope (and that enabled solving for the three-dimensional structure of the native HIV Envelope trimer), which is the target of all broadly neutralizing antibodies, and the identification of potent, broadly neutralizing antibodies in a small subset of infected individuals. 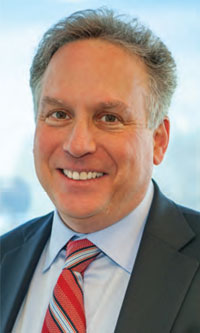 Mark Feinberg is President and CEO of the International AIDS Vaccine Initiative.

IAVI and our partners were one of the global collaborative teams that played a leading role in the identification of new broadly neutralizing antibodies and in describing how they develop in infected people. These antibodies are able to block infection with a wide range of genetically diverse variants of HIV in the laboratory, and have been shown to protect monkeys against a hybrid simian/human immunodeficiency virus (SHIV). This provides strong support that these are the types of immune responses we want to recapitulate with a vaccine.

Detailed structural analyses of how these antibodies interact with the virus unveiled multiple targets on the HIV Envelope for vaccine researchers to exploit. By applying cutting-edge technologies and methods in protein engineering, scientists are designing vaccine immunogens using a structure-based vaccine design approach. Through a detailed understanding of how such broadly neutralizing antibodies develop over time in infected individuals, the importance of engaging the initial B-cell populations expressing germline antigen receptors became clear. These germline B-cells represent the precursors from which broadly neutralizing antibody responses can eventually develop, and researchers are attempting to elicit them via specifically designed HIV vaccine immunogens. This work is the most sophisticated, elegant, and insightful vaccine science that has ever been done. And now, the first of these structure-based vaccine candidates, predicated on so-called “germline-targeting” approaches, as well as some of the native-like trimeric proteins, will soon be tested for the first time in human volunteers. Stepping back from a specific focus on HIV vaccine development, it is clear that these studies represent the start of a new era for how vaccine immunogen design and development programs will be rationally approached for a wide range of infectious disease targets in the future.

While these first-generation candidates are unlikely to induce broadly neutralizing antibodies by themselves, we will be able to get a clear indication of whether they are on the right track early on in clinical development. This is another promising aspect of these hypothesis-driven approaches. Even in Phase I studies, the earliest studies of the safety and immunogenicity of a vaccine candidate, we will be able to tell whether the vaccine is achieving its intended goal. With empirical vaccine approaches—especially when a clear correlate of protection is not available from preclinical studies—it was only when a vaccine candidate advanced to large-scale efficacy trials involving thousands of people that we would find out whether or not it worked. The goal with this new generation of candidates is to utilize data from the initial clinical trials to not only determine if the approach being pursued is working as intended, but to also inform how to refine and improve the candidates much faster and much earlier in the development process.

Meanwhile, researchers are exploring whether the crop of recently identified broadly neutralizing antibodies can be used directly to either prevent or treat HIV infection. There are already studies testing the efficacy of passively administered broadly neutralizing antibodies to prevent HIV infection, and several other antibodies with greater breadth and potency and longer half-lifes are also in development. While we work to develop an efficacious vaccine, these antibodies may provide an additional tool to help reduce infection rates, and one that could be available sooner.

While the effort to develop an HIV vaccine has yielded many disappointing results, tremendous scientific progress has been made and will continue to be made as these rationally designed vaccine candidates enter clinical trials. This is not to say a vaccine is right around the corner. The path is still going to be long and likely complicated, and there will probably be surprises and disappointments along the way, but we now have a much better understanding of what it will take to make an HIV vaccine.

Success can’t come soon enough. We need new ways to stop the spread of HIV if we are going to successfully end this epidemic. There has been tremendous progress in making treatment more widely available, but unfortunately, the rates of new infections have not fallen appreciably. Only about half of the people who need treatment are currently receiving it, and there are still about two million people becoming infected each year who will need treatment for the rest of their lives. We need to do everything we can to make sure that as many people as possible are able to access life-saving antiretrovirals, but treatment alone is not going to end this epidemic. Ending it will require maximizing treatment availability and developing and providing broad and affordable access to new innovations to prevent HIV infection. The only way an epidemic has ever been eliminated or eradicated in human history is with a vaccine. We will need one to end AIDS.