Could overly optimistic messages be contributing to the drop in global HIV/AIDS spending?

The pandemic isn’t over, but that might be what donors are hearing.

A global mission to end AIDS by 2030 has caused a groundswell of optimism. Could it also be, inadvertently, contributing to a recent decline in HIV/AIDS funding?

A report released this year from the Institute for Health Metrics and Evaluation (IHME) shows that after an annualized growth of 20 percent between 2000 and 2012, development assistance for HIV/AIDS has decreased 5.4 percent annually since 2012. This encompasses funding from governments, philanthropic organizations such as the Bill & Melinda Gates Foundation, and individual donors. Development assistance for HIV is now around US$10 billion, well below the $26.2 billion that the Joint United Nations Programme on HIV/AIDS, or UNAIDS, says is needed by 2020 to meet global HIV prevention and treatment targets.

Public policy researchers attribute the drop in HIV/AIDS spending to multiple factors. Refugee and asylum costs and other global health priorities are competing for and winning donor dollars once targeted for HIV/AIDS. Also, several European countries have shifted their bilateral contributions—foreign aid given by one country to another—to multilateral agencies like the Global Fund to Fight AIDS, Malaria and Tuberculosis, while also reducing their level of support.

It is also possible that the rhetoric around ending AIDS may be sending the wrong message to funders. Donors may hear messages like, “we can end AIDS now,” or “we have the tools to end AIDS,” and think the major hurdles in the epidemic are past us, says Chris Beyrer, professor of epidemiology at the Johns Hopkins School of Public Health and a past president of the International AIDS Society (IAS). “We are not done with AIDS. I think some of the messages out there about achieving epidemic control and ending AIDS as a public health problem have been problematic,” says Beyrer. “We have done ourselves a disservice by selling to a policy maker or donor audience that we have this problem solved when we haven’t.”

Linda-Gail Bekker, deputy director of the Desmond Tutu HIV Centre and current president of IAS, concurs. “The decline in HIV funding is deeply disturbing as the epidemic is far from over,” says Bekker. “Unfortunately, premature talk of ‘ending AIDS’ may have caused some to believe erroneously that the epidemic is over. We need to revitalize our activism and emphasize to decision-makers the stakes that are involved in the future of the HIV response. If we fail to strengthen our efforts, we will almost certainly see a resurgence of the epidemic.” 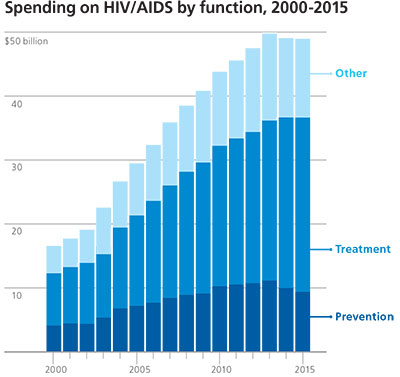 Bekker says the scale-up of treatment in recent years has been remarkable, with a turnaround in life expectancy in a number of countries, especially those in southern and East Africa. At the same time, however, almost 2 million people are still becoming infected every year, she said. “As we approach what feels like the second half of the history of AIDS, the world needs to think about HIV and the AIDS response as a long-term project that needs a long-term plan and sustainable funding, which may require innovative thinking to secure.”

The latest report from the IHME, an organization based at the University of Washington, is the group’s ninth on global health spending and health financing, and it offers an unusually deep analysis of trends in HIV spending over time, using data provided by 188 countries. The analysis shows, for instance, that prevention programs were hurt most by the reduction in HIV/AIDS spending, while funding for treatment programs remained relatively stable.

HIV/AIDS has accounted for the largest percentage (26.8 percent) of development assistance health dollars doled out since 2000, the report found. But in the last few years more development assistance has gone to maternal, newborn, and child health programs than for HIV/AIDS. Ironically, the success in bolstering maternal and child health programs in sub-Saharan Africa is now one of the biggest threats to sustaining the HIV/AIDS response. As these children enter adolescence, experts warn that HIV infection rates could once again rise, particularly in sub-Saharan Africa.

Though South Africa still has the largest HIV/AIDS epidemic in the world, it will probably not be severely impacted by the reduction in donor funding, says Salim Abdool Karim, Director of the Centre for the AIDS Program of Research in South Africa (CAPRISA). “Since the South African government provides more than 80% of the funding required for the country’s AIDS response, the effect of reduced donor funding will likely be minimal.”

This is not the case for many other countries burdened by HIV/AIDS that are far more dependent on foreign aid. “It is clear that the lowest income countries cannot pay for their response on their own,” says José Antonio Izazola-Licea, Special Advisor for Resource Tracking and Finances at UNAIDS. “These countries must continue to be supported and not be forced to face an epidemic where more people die because of a lack of treatment, and new HIV infections increase due to a lack of resources for HIV prevention efforts.”

Mary Rushton is a freelance writer based in Cambridge, Massachusetts.