Several areas of progress in using antibodies for HIV prevention were showcased at the recent Keystone Symposia.

Vaccines have contributed tremendously to preventing infectious disease. Yet three decades after the discovery of HIV, a vaccine against the virus remains elusive. Difficulty in achieving this goal lies primarily in the enormous antigenic diversity of HIV, and the virus’s ability to cover its most conserved epitopes with sugars that are relatively invisible to the immune system. 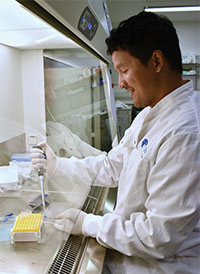 Despite these challenges, investigators remain dedicated to the mission and are using innovative approaches and technologies to make significant strides toward developing a protective HIV vaccine. In keeping with structure-based rational vaccine design, researchers are collecting even more detailed information on the sole target for neutralizing antibodies: the HIV Envelope (Env) trimer. This information is helping to inform the design of a new generation of HIV vaccine immunogens intended to induce the types of broadly neutralizing antibodies (bNAbs) that have been described from chronically infected individuals. Following evaluation of these immunogens in animal models, several are now being readied for human clinical trials. Researchers are also making progress in understanding the role of antibody effector functions in protecting against HIV. These themes and other new findings were reported on at the Keystone Symposia in Banff, Canada, where two meetings were held in parallel: Progress and Pathways Toward an Effective HIV Vaccine and Emerging Technologies in Vaccine Discovery and Development.

While both Keystone meetings focused primarily on attempts to elicit protective antibodies through vaccination, exciting data were also presented on passive immunization approaches, which sidesteps the immune system and instead delivers the antibodies directly to achieve protection.

The lessons learned from HIV vaccine design and development are also being applied more broadly against other infectious diseases. At Keystone, several researchers discussed how innovations in antibody isolation and other vaccine-related technologies are fueling efforts to develop vaccines against influenza, malaria, and other infectious pathogens.

Despite the enormous antigenic diversity of HIV, the discovery and characterization of bNAbs have enabled identification of the most conserved epitopes on the Env trimer. Our understanding of these epitopes has advanced further through structural studies using X-ray crystallography and electron microscopy, which provide high-resolution information on what these epitopes look like. This information can then be used by researchers to engineer immunogens that faithfully mimic these epitopes to elicit bNAbs by vaccination.

Typically, however, these structural studies only provide a snapshot of what the Env trimer looks like at a given instant. To provide more information on the dynamics of the HIV Env trimer, researchers are using different techniques to measure the distances between two sites on the protein. These measurements are very sensitive, so any changes in the distance between the two sites, through conformation changes for example, can be captured. Although there are disagreements on how these experiments are performed and what information can be gleaned from them, the results of these studies highlight important progress toward a more comprehensive understanding of the Env trimer. Indeed, achieving a detailed level of understanding of the HIV Env protein structure and its dynamics would allow researchers to design the best epitope mimics to effectively elicit bNAbs through vaccination.

Meanwhile, structural studies are also guiding efforts to design vaccines for other viruses. At Keystone, researchers presented the results of structural studies for respiratory syncytial virus (RSV), human metapneumovirus (hMPV), coronaviruses, Ebola virus, and malaria, all of which will greatly inform vaccine design efforts for these infectious diseases. 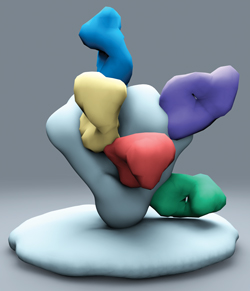 Electron microscopy reconstruction depicting antibodies attached to the HIV Envelope glycoprotein trimer at several sites of vulnerability shown in different colors. The areas of antibody attachment are the conserved epitopes that are currently being used by vaccine researchers as targets to design next-generation immunogens. Image courtesy of Andrew Ward and Christina Corbaci at The Scripps Research Institute.

Armed with structural information on the HIV Envelope trimer, investigators have designed several immunogens to try to elicit bNAbs. To test this new generation of engineered immunogens, we rely on animal models to evaluate their immunogenicity as part of an iterative design and evaluation process. Many different immunization experiments have been performed to date, including studies in transgenic mice, which are engineered to express human antibodies, as well as in a variety of other animal models including rabbits, guinea pigs, rhesus macaques, and even cows. These experiments have been important for answering specific hypotheses, but much more remains to be learned once these results can be compared to data emerging from future clinical trials with the same immunogens. There are currently plans to evaluate several of these rationally designed, next-generation vaccine immunogens in human trials, including the native-like trimer BG505 SOSIP.664 Env trimer (see IAVI Report, Vol. 21, No. 2, 2017) and the engineered outer-domain nanoparticle mmunogen (eOD-GT8; see IAVI Report, Vol. 21, No. 1, 2017).

Besides the many efforts to elicit bNAbs through vaccination, there is a continued focus on the role of non-neutralizing antibodies and/or effector functions at mediating HIV protection.

Previous studies with the first-generation antibody b12 showed that there was a reduced level of protection when mutations were introduced to the antibody to eliminate its Fc receptor effector functions. But follow-up studies with one of the new generation of bNAbs, PGT121, indicate that the same mutation did not affect the antibody’s ability to block the virus. These results suggest that the role of effector functions for mediating protection against HIV is likely antibody dependent, and/or virus dependent. Data were also presented at Keystone that emphasized how differences in assays designed to measure antibody-dependent cellular cytotoxicity (ADCC; the ability of a virus to trigger killing of a virus-infected cell), might lead to different interpretations. For example, the choice of HIV Env used in the assay is important as certain mutations in Env could lead to greater susceptibility to antibody-mediated ADCC activity. Overall, despite differences in the assays, bNAbs consistently offered higher specificity for killing HIV-infected cells than non-neutralizing antibodies.

Despite the progress in designing HIV vaccine candidates, several challenges need to be overcome before an efficacious product can be affordably administered around the world. In the meantime, many researchers are pursuing passive vaccination strategies, which involves directly delivering bNAbs over one’s lifetime, similarly to how people with diabetes need to take insulin throughout their lifetime.

HIV bNAbs are currently being evaluated in proof of concept clinical trials to test their efficacy both prophylactically, as well as for HIV treatment or even potential cure for those already infected with the virus. Indeed, several next-generation antibodies are at different stages in the clinical pipeline, including some that are altered so that they have much longer half-lives than the original parent antibody. In addition to these modifications, other innovative approaches are being explored to reduce the number of antibodies that needs to be delivered to be effective. For example, one set of investigators have developed a bi-specific antibody, created by combining two antibodies (10E8 and ibalizumab) into a single construct, whereas other investigators have designed a tri-specific antibody that combines three antibodies (VRC01, 10E8, and PGDM1400) into a single construct. Both of these molecules show remarkable breadth and potency and are scheduled for evaluation in Phase I clinical trials in upcoming years. While vaccine research efforts continue, the development of HIV bNAbs for prevention could achieve public health impact in the interim.

Although the road to an HIV vaccine has been and will likely continue to be arduous, many agree that a preventative vaccine will achieve the highest impact in reducing the incidence and prevalence of HIV/AIDS. Investment in both HIV vaccine research and in antibody discovery and development for HIV prevention will not only benefit millions of people affected by the disease, it can also contribute significantly to the development of effective prevention products for other infectious diseases.

Devin Sok is Director of Antibody Discovery and Development at IAVI.