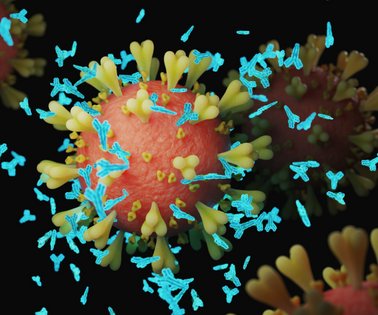 Therapeutic antibodies against SARS-CoV-2 were developed faster than any other intervention, but their use remains limited. What lessons are there for the development of other monoclonal antibody products, including those for HIV?

Much has been said about the record-breaking speed of COVID-19 vaccine development. But technically, antibodies won the race.

SARS-CoV-2-specific antibodies were authorized before vaccines or bespoke antiviral drugs, such as Paxlovid. The first antibody for COVID-19 received an emergency use authorization (EUA) from the U.S. Food and Drug Administration (FDA) in early November 2020, about a month before the first COVID-19 vaccine. In late November 2020, a two-antibody cocktail also received an emergency use authorization for COVID-19 therapy.

In recent years, researchers have focused on how quickly they could isolate and develop antibodies in response to infectious disease outbreaks. Their progress was on full display when the COVID pandemic began. “We went from a blood sample to giving AstraZeneca the antibody sequences in 25 days,” recalls James Crowe, director of the Vanderbilt Vaccine Center, who led some of the high-speed scientific work that resulted in the first prophylactic antibody combination for COVID-19. “The rapidity with which we could do the discovery and validation was incredible.”

These antibodies are referred to as monoclonal antibodies (mAbs) because they are identical proteins manufactured in a laboratory from the cells that produce them. The technologies that allow scientists to isolate and manufacture mAbs in large quantities are now decades old, and today, antibodies are one of the fastest growing segments of biomedical science and are among the top-selling pharmaceutical products in the world, accounting for over US$100 billion in annual sales. 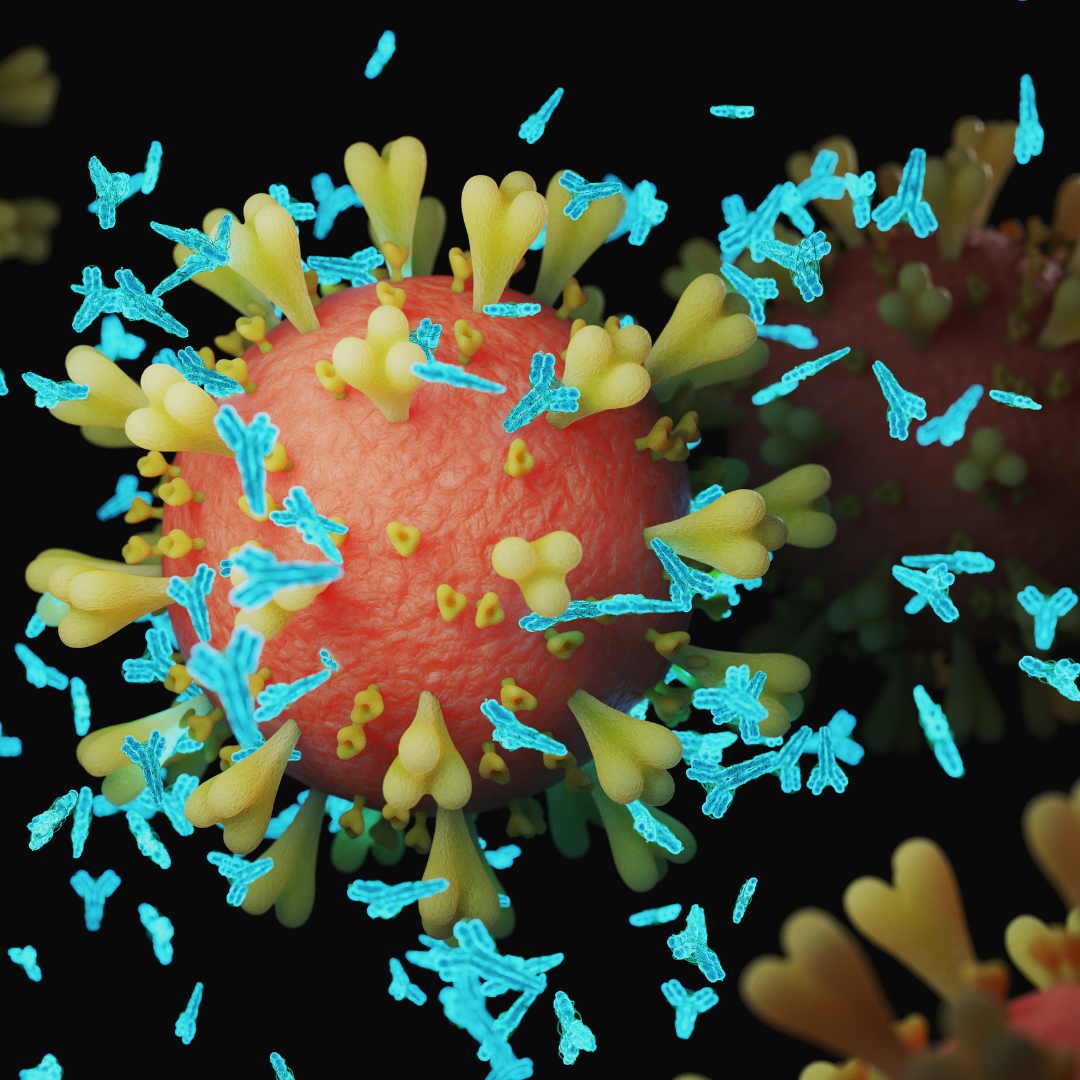 These manufactured antibodies function just like those made naturally by the immune system and can bind to and inhibit a pathogen or cancer cell. In 2021, the FDA approved its 100th mAb. Most of these mAb products are used to treat non-communicable diseases such as cancer, heart disease, and autoimmune diseases, including rheumatoid arthritis. Perhaps surprisingly, before COVID there were only a handful of mAbs licensed for the treatment or prevention of infectious diseases.

“They are typically not used for infectious diseases, which I find surprising, because if you look back at when the immune system was first being discovered, the basis of all that work was the transfer of polyclonal antibodies from animals to humans which proved that antibodies were sufficient to prevent or treat things from both bacterial and viral pathogens, including rabies and tetanus,” says Crowe.

This may be poised to change. “We’re at a tipping point in medical history,” when it comes to antibodies, says Crowe. “COVID is the tipping point.”

Indeed, COVID-19 has added substantially to the number of authorized mAb products for infectious diseases, and, as a result, people have become aware of their potential. In total, five monoclonal antibodies against SARS-CoV-2 were authorized by the FDA, either individually or in combinations, to treat or prevent COVID-19. Eventually, in many cases, the evolution of the virus resulted in mutations that markedly reduced the virus’s susceptibility to neutralization by the authorized mAbs and rendered some of them obsolete.

But even before that happened, their use was rather limited.

This is not because they don’t work well. “One thing people don’t appreciate is that the antibodies work better prophylactically and for longer in high-risk individuals than any vaccine that has been approved for COVID,” says Crowe. “The efficacy after two doses of mRNA vaccines at six months is somewhere around 30% against all disease, not just severe disease. If you look at the Evusheld trials, the efficacy was 83% at six months. And that wasn’t in healthy people, that was in people at high risk, so a much higher efficacy at six months than mRNA vaccines.”

Evusheld, a two-antibody combination developed and manufactured by AstraZeneca, was the first mAb therapy to receive an FDA authorization for pre-exposure prophylaxis in immune compromised individuals. It is administered as two intramuscular injections, one of each antibody product.

The staying power of these mAbs is the result of modifications to their Fc regions — if you think of an antibody being Y-shaped, the Fc region is the stock of the Y. These modifications substantially increase the half-life of the antibodies, meaning they stick around for longer in the body. That coupled with their high potency — which means it takes less antibody to neutralize the virus — make the preventive efficacy of the Evusheld mAbs more sustained. “It’s predicted that protection could last well over a year,” Crowe adds. Other mAbs his lab is developing for Rift Valley fever are so potent, it might be possible to achieve five years of protection from a single intramuscular injection.

For Crowe, this justifies the optimism around developing and deploying mAbs for the infectious diseases of today, as well as those that will certainly arise in the future. “It proves the point that we have the technology to prevent diseases with antibodies and we should use it more. I think it is a super-exciting time in biomedicine because antibodies are going to revolutionize how we manage emerging infections.”

That is why Crowe started the AHEAD 100 initiative. This research program aims to identify and generate 100 mAbs that are effective against 25 high-risk virus families that have the potential to ignite future epidemics, test them through Phase I clinical trials, and then stockpile them so they are ready when an outbreak occurs, essentially snuffing it out before it can escalate into a pandemic.

Once an outbreak reaches pandemic levels, it becomes much more difficult to address it with mAbs, as COVID-19 illustrated. There are several reasons for this. One is the limited capacity to manufacture mAbs at the scale necessary for a pandemic response. Even in the U.S., where uptake was the highest, COVID mAbs for treatment or prevention were never widely available, and that was in part because of low supply. In low- and middle-income countries, COVID mAbs, or mAb products altogether, can be much, much harder, if not impossible, to come by.

Even if all of the existing mAb manufacturing capacity in the world was put toward making COVID-19 mAbs, it wouldn’t come close to meeting global needs, according to Stephen Hadley, a senior program officer at the Bill & Melinda Gates Foundation who is well-versed on the challenges of mAb manufacturing and delivery.

“And you’ll never get all of that capacity because it’s being used to make other products, so where do you get the capacity needed to make all the antibody needed for a really robust global response to a pandemic?” he asks. “The manufacturing scale problem is not one that should be dismissed.”

And even when they are available, mAbs tend to be much more expensive than vaccination or traditional oral antivirals, which means supply isn’t the only problem. Demand can be a problem too. One of the earliest therapeutic COVID-19 mAbs authorized was a two-antibody combination (REGEN-COV) from Regeneron. It was reported to be the most widely used mAb in the U.S. and was reported to cost $1,250 per infusion. Other COVID mAbs are reported to cost more than $2,000 a dose. By comparison, a single dose of the Pfizer/BioNTech mRNA COVID-19 vaccine Comirnaty in the U.S. came with a price tag of approximately $20.

“There are some important lessons here,” says Hadley. “One is how expensive these antibodies are on a dollars per gram basis, which leads to real challenges in affordability.” This is particularly true for adult indications. Hadley says the prospect of using mAbs prophylactically in infants for conditions such as respiratory syncytial virus is more feasible because it requires much lower doses, which means a lower cost to manufacture, and, ultimately, a lower price.

Another lesson is that the delivery of mAbs by intravenous (IV) infusion is a hindrance to their use. Many of the COVID-19 mAbs, at least initially, were only available by infusion, which requires trained staff and medical supervision. To be effective, most therapeutic mAbs also had to be administered early in the course of infection, which was another limitation.

“We have always believed that IV administration is not practical in the geographies that the foundation is focused on,” Hadley says. But what surprised many was that IV administration of COVID-19 mAbs was also a deterrent in high-income countries during the pandemic. Initially the concern was that demand for these therapies would quickly outpace supply. But that didn’t happen.

Even in the U.S., mAb therapies for COVID-19 received a lukewarm response early on. There was a shortage of staff to deliver the mAbs and a lack of interest from patients. “That was a really interesting lesson learned,” says Hadley. “COVID brought all of that into very sharp focus for the first time.”

HIV researchers are already attuned to many of these issues. In July, the World Health Organization issued a technical document detailing the preferred product characteristics for mAbs for HIV prevention. This document, which was prepared in part by IAVI, notes that subcutaneous or intramuscular injection is highly preferable for delivery of HIV mAb products in low- and middle-income countries. It also outlines the target populations that could benefit most from this strategy. “For those at high risk of HIV infection, mAbs could constitute an important alternative biomedical prevention option, if key determinants of implementation feasibility can be addressed,” according to the document.

Addressing those determinants will be challenging. The Antibody Mediated Prevention trials, the only proof-of-concept trials of HIV antibody prophylaxis so far, showed that, at least in principle, the single mAb VRC01 could block infection with viruses that were sensitive to neutralization by this antibody. Based on these results, researchers suspect a combination of three mAbs will be necessary to provide sufficient protection against the wide variety of circulating HIV strains. Delivering three antibodies by injection at the level required for protection will require those mAbs to be extremely potent. And there will still be many other issues to resolve.

“Obviously there are issues about administration and dose, there are also cost issues, and there are many questions that we don’t know the answers to yet,” says Lynn Morris, deputy vice-chancellor of research and innovation at the University of the Witwatersrand in Johannesburg, South Africa.

“COVID has given us a little bit of a wake-up call,” she says, noting that the quantity of antibody required to block HIV is much higher than what is required for SARS-CoV-2. “But I don’t think there is a dampening of enthusiasm for this approach.”

If anything Morris’s enthusiasm was buoyed by recent modeling work that showed that three very broad and potent HIV neutralizing antibodies in combination could potentially be 90% effective at blocking HIV acquisition. Although it may not be easy, Morris says that without a vaccine to prevent HIV infection, the prospect of antibody-based prophylaxis is an exciting alternative. “This is worth doing.”