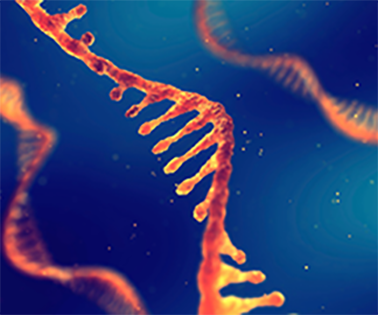 Right now in vaccine research, mRNA has the momentum.

For HIV, there are currently several formulations of experimental vaccines in early-stage human clinical trials. Apart from some overlap in strategy, they have one main thing in common — they rely on mRNA.

This trend reflects the intense overall interest in mRNA-based vaccine development, given its high profile and remarkable success in two of the licensed vaccines against COVID-19. More than a dozen other mRNA-based COVID-19 vaccines are in development across the globe.

Though it became one of the greatest scientific advances of the pandemic, the use of single-strand mRNA to deliver antigens and therapeutic proteins has a much longer development history — much of it gathered in the HIV and cancer fields. Vaccine experts say that this background, along with the resources, capabilities, and intent shown by Moderna and other manufacturers involved in mRNA development, will propel its use as a tool against HIV and other infectious diseases.

Negative staining electron microscopy image of an mRNA-expressed Env-Gag virus-like particle. The experimental antigens show a mean number of spikes per particle at more than twice the number present on wild-type HIV-1 virions. Image courtesy of National Institutes of Health/National Institute of Allergy and Infectious Diseases

One of the most often touted advantages of mRNA-based vaccines is their relative speed and ease of development and manufacture. But researchers watching or involved in the trials say there’ll be more gained by the nascent forays into mRNA-based HIV vaccines than that.

The mRNA platform will be used to interrogate how well this approach works for different types of HIV immunogens or whether mRNA can be used to effectively boost immune responses induced by other delivery systems. Researchers also plan to study how well mRNA vaccine technology can be modified to elicit stronger, long-lasting, and more broadly neutralizing antibody responses.

Decades of research in the HIV field helped speed the development of COVID-19 vaccines. Now, in turn, COVID-19 vaccinology may create its own ripple effect. “I don’t think we would have seen as rapid a transition to the mRNA platform for these different HIV vaccines had it not been for COVID-19,” says David Montefiori of the Human Vaccines Institute at Duke University. “It catapulted it. That’s a good thing: I hope it will end up accelerating the pace of progress in HIV.”

On March 14, researchers began administering the first doses in a Phase I trial of three vaccine formulations delivering HIV Envelope (Env) protein antigens via mRNA. HVTN 302, as the trial is called, is set to examine the safety and immunogenicity of three separate, slightly varying antigens; each is a genetically stabilized formulation of the trimeric spike protein HIV uses to bind target cells. Rogier Sanders, a virologist at the University of Amsterdam’s Academic Medical Center, says the immunogens are somewhat more stable versions of the original BG505 SOSIP trimers.

Earlier this year another Phase I trial, IAVI G002, launched with a different set of immunogens employing a different strategy. The antigens in G002 were first studied in humans in 2021; this time they are being delivered in an mRNA formulation. Instead of being a complete native trimer spike, G002 is analyzing an even more specific antigen, just a fragment of viral protein called the engineered outer domain: this is the part of the spike that contains the binding site to HIV receptors on a cell, and which is a major target for neutralizing antibodies. The trial will inform a vaccine strategy called germline targeting, aimed at using a series of antigens to coax the body’s immune system over time to produce more and more effective antibodies that are capable of neutralizing the broad variety of HIV isolates in circulation.

Both trials are important for technology development and for testing this multi-component vaccination strategy. This highlights some of the advantages of mRNA vaccine design, but also that it will not be an instant solution to a vexing problem — how to induce broad and potent immune responses against HIV. “It’s going to depend on what you put in the mRNA,” Montefiori says.

Even as these trials pick up pace, more HIV vaccine research efforts employing mRNA are in the wings. A large team of researchers — including Peng Zhang and Paolo Lusso of the U.S. National Institute of Allergy and Infectious Diseases’ (NIAID) immunoregulation laboratory, as well as NIAID’s Vaccine Research Center and partners at Moderna — are analyzing results of an mRNA-delivered complex antigen expressed by the extracellular release of virus-like particles. Virus-like particle vaccine strategies have a long (and fascinating) scientific history. Lusso and his colleagues think genetic engineering technologies have developed to a point where there is now at least a better chance of success.

His team is analyzing data from recent non-human primate studies and is in planning for early-stage human clinical trials. Other animal studies ongoing in Barton Haynes’ laboratory at Duke University are testing complex mRNA-encoded trimer ferritin nanoparticle immunogens. Haynes and his colleagues Zekun Mu and Derek Cain have also written comprehensively about the potential for mRNA in HIV vaccines.

The momentum for applying mRNA to HIV vaccine candidates is encouraging to many in the field, given the notable failure of many HIV vaccine candidates over the years. But no one thinks this delivery system will be a panacea given all the challenges HIV presents. HIV is one of the most diverse pathogens found in nature. “RNA does not address that at all,” Sanders says. “In HIV vaccine research we need to devise these sequential vaccination programs. We need to do a lot of iteration in experimental medicine trials.” This is where speed comes into play. Using mRNA means these iterations can get moving in a matter of months, rather than a longer, multi-year timetable for other technologies.

But the HIV antigens still need to be optimized and selected. “Then we’ll need to select the next step immunogens. And those need to be optimized,” Sanders adds. Both the germline targeting strategy and Lusso’s virus-like particles envision complicated regimens of multiple shots over time, which the COVID pandemic has shown to be a difficult proposition at best. “And we don’t actually know how many steps we’ll need in a sequential regimen,” says Sanders.

There are other hurdles too. The immune responses induced by mRNA-based SARS-CoV-2 vaccines seem to tail off rather quickly following vaccination; this would certainly be an issue with a pathogen such as HIV. The AMP studies, completed in early 2021, showed that persistently high volumes of neutralizing antibodies are likely necessary for an effective HIV vaccine, and that will be another obstacle. “The durability question is also an important one,” Montefiori says.

Looking ahead, the pandemic has also focused intense attention on the need to expand and diversify research, development, and manufacturing efforts for all vaccines — even those employing new technologies such as mRNA — particularly in sub-Saharan Africa and Latin America, where the HIV burden is greatest, and in India, which has become a massive vaccine production hub for the globe. Sanjeev Kumar is a young research fellow at the International Centre for Genetic Engineering and Biotechnology, pursuing HIV vaccine research as part of his doctorate at the All-India Institute of Medical Sciences in New Delhi. He expects to employ mRNA technologies not just in HIV but also in the lab’s work in formulating experimental vaccines against Zika and Dengue. “These are now feasible to manufacture and develop at large scale in India,” he says.

By the end of 2022 in sub-Saharan Africa there should be a new arm of the G002 mRNA vaccine trial launched in Rwanda and South Africa, with local research expertise making use of advanced lab infrastructure there.

Stay tuned to IAVI Report for more developments to come.