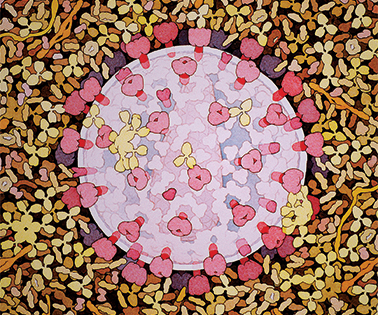 Charting the way to a cure

HIV cure researchers are energized by news of another case of remission and the development of new tools that could help researchers evaluate how well other cure strategies are working.

Locating cells in the human body where intact HIV genetic material rests quietly, waiting for a signal to rebound, is like trying to find specific drops of water in the sea.

Apt enough then that researchers may turn to developing a line of drip-sorting assays to ferret out these bits of virus that may be in hiding throughout the body. They’re looking to shine a kind of powerful searchlight to help them map what is termed the latent reservoir — the scattered genetic material of the virus that must be located if researchers are to achieve a cure.

This latent reservoir can be different in each person living with HIV. It is made up of cells that harbor integrated HIV DNA, but for the most part do not replicate and so go undetected as foreign by the body’s immune system. As long as a person living with HIV is on antiretroviral therapy this is typically not an issue. If for whatever reason this therapy stops, however, this largely latent reservoir of virus-infected cells can rapidly drive rebound of HIV in almost all cases.

Therefore, this viral reservoir must be eradicated — all, or nearly all of it, effectively and with high confidence — if there is ever to be a real HIV cure. This quest to do so has been on for a long time.

For the last decade the International AIDS Society (IAS) has convened experts to develop five-year strategy maps outlining the contours and aims for HIV cure research, with the latest produced at the end of 2021. It’s an ambitious agenda. The latent reservoir is a central theme, specifically the need to pinpoint where exactly the virus is hiding out in people on long-term antiretroviral therapy.

It’s also vital to determine the impact any therapeutic or potential cure intervention is having on the reservoir. To do this, researchers set out to find a biomarker — a virological or non-virological signal in a blood test that can meaningfully predict what will happen after interrupting treatment. And to develop a biomarker, researchers need to better understand the reservoir.

Six months after launching the latest strategy map, researchers gathered in Montreal for the first in-person convening of the bi-annual IAS meeting since the start of the COVID-19 pandemic. New techniques that can find and sort single-cell transcriptomes based solely on HIV DNA detection drew attention at the meeting.

One recently developed approach uses single-cell analysis of HIV DNA: it was characterized in studies by Mathias Lichterfeld and Xu Yu at the Ragon Institute of Massachusetts General Hospital, MIT, and Harvard, Kevin Einkauf at Stanford, among others. This technique, called PRIP-seq, can tell researchers on a cell-by-cell basis whether virus is intact or defective, where it is located within a person’s chromosome, and whether it is active or not.

Another approach uses microfluidics — a method of screening millions of single cells and capturing genomic DNA and RNA transcripts within water-in-oil droplets. This process may be able to help researchers understand what is different about these latently infected cells. It was presented in Montreal by Eli Boritz of the Vaccine Research Center at the National Institute of Allergy and Infectious Diseases. It is called FIND-seq and it was developed in collaboration with researchers at the University of California, San Francisco (UCSF), with more details expected to be published soon.

These two new techniques could help researchers better characterize the HIV reservoir and determine how well strategies aimed at eliminating it are working. “With these new assays, the story becomes far more fascinating,” says Steve Deeks, a longtime HIV cure researcher, clinician, and scientist at UCSF. “Location matters and has a direct impact on whether a virus is ‘rebound-competent,’ which is really what we care about.” Using technologies such as these could help researchers progress toward a cure, as Deeks told the journal Science when the PRIP-seq study came out in January.

Newly-appointed IAS president Sharon Lewin said in Montreal that identifying HIV genetic material at the individual cell level is like finding a needle in a haystack. And it is still early days, even if researchers can now more precisely locate these “needles.” As the IAS strategy lays out, there are more than 10 HIV subtypes worldwide, the virus can be found in tissue as well as blood, and there will be further issues to solve about expense and speed of using these types of techniques. “These assays have not yet been tested for their ability to measure the rebound-competent reservoir, which is probably only a subset of cells,” Lewin says. “The assays are complicated, expensive, and not scalable.”

More work is also needed to establish biomarkers, Deeks says. “The explosion of single-cell technologies and studies have led to the identification of many candidate biomarkers, but validating them will be tricky,” he says. “We are conducting an intensive treatment-interruption study designed specifically to characterize how these biomarkers might behave just as the virus is starting to rebound.” Treatment-interruption studies have stirred some controversy and debate over the last two decades, but in recent years ethical standards and acceptance of the need for them have become more settled.

The hunt for biomarkers indicating proviral status in the HIV latent reservoir could become easier as microfluidics and other assay technologies mature. “These assays are promising first steps as they are giving us an insight into the quality of the reservoir, which standard DNA and RNA measurements could never do,” Lewin says. “We are making progress.”

The methodical hunt for biomarkers as a guide for diagnostics, immunotherapies, and other genetics-based interventions extends through several fields of infectious disease and cancer research. This summer researchers presented findings based on the 15-year-old AFRICOS HIV cohort, which has followed people living with HIV in tuberculosis (TB)-endemic countries. The research shows assessing the activation status of mycobacterium tuberculosis-specific CD4+ T-cells can help diagnose incipient TB disease earlier — often before the bacteria shows up in sputum. Early detection and treatment of TB could reduce severity in infected patients.

Other assay technologies, such as high-throughput proteomics, RNA in situ hybridization, and metagenomics to characterize microbial signatures are also being harnessed to identify biomarkers to support therapies in inflammatory bowel disease, neuroscience, and oncology.

For HIV, these biomarkers will be essential to evaluating future cure strategies. News emerged at this summer’s IAS meeting of another case of HIV cure following stem cell transplant delivered as part of cancer treatment. Though not broadly applicable or accessible, the repeated instances of cure are evidence that the goal is possible.

Other advances using gene-based therapies and the editing tool CRISPR are also being applied to HIV: for instance, with Temple University’s clinical trial of an infusion made using CRISPR technology, the aim being to remove proviral HIV from infected cells. Lewin is also closely following the development of interventions using combinations of latency reversing agents — compounds designed to flush latent virus from dormancy so that the virus can be detected by the body’s natural defenses — alongside immune-based therapeutics.

If further progress is made in defining biomarkers for the latent reservoir, the research paths to developing and evaluating all these strategies will be much clearer. It’s an essential piece for a cure strategy, but only a piece. “Ultimately,” Deeks says, “we need an intervention that works before we can truly figure out how any of these measurements predict the future.”