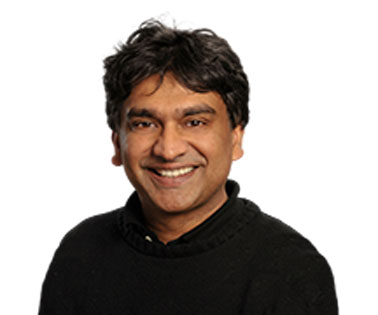 Beyond a witches' brew

An interview with Bali Pulendran on how adjuvants might extend the durability of mRNA-based vaccine protection.

Some vaccines can induce immunity that lasts a decade. Others even longer than that — a single shot of the yellow fever vaccine can provide lifelong protection against the virus for many people. If you’ve already had your third or fourth dose of a COVID-19 vaccine, you might be wondering what the difference is. In some ways, scientists are too.

Although mRNA-based COVID-19 shots are still effective at protecting against the worst outcomes — severe disease and death — their efficacy is waning, particularly against new viral variants that can evade antibody responses induced by existing vaccines. This is leading researchers to focus on more broadly protective COVID-19 vaccines, including some that would ideally offer protection not just against SARS-CoV-2, but the entire family of coronaviruses.

It isn’t entirely clear why vaccine protection wanes more quickly with some vaccines than others, but studies are revealing how durability is related to signaling in the innate immune system. And adjuvants — substances that are either added to vaccines or incorporated directly into a vaccine formulation to augment antigen-specific B- and T-cell responses — are one way to augment the durability of vaccine-induced immunity.

I recently spoke with Bali Pulendran, the Violetta L. Horton professor of pathology, microbiology, and immunology at Stanford University, about his research on Pfizer/BioNTech’s mRNA-based COVID-19 vaccine and the potential for using adjuvants to enhance its durability.

An edited and abridged version of our conversation appears below.

Is there a durability issue with mRNA-based COVID-19 vaccines or is it just a matter of new variants escaping antibody responses induced by the vaccine?

Well, first, I think we should note that the mRNA vaccines have been truly transformative. Were it not for them there would have been many more deaths and serious illnesses over the last few years, and so we should all be thankful for the amazing contribution mRNA vaccines have made and will no doubt continue to make in the coming years and decades.

Having said that, we’ve also become acutely aware of some of the limitations of the mRNA-based COVID-19 vaccines, and one that I think we can all agree upon, is the fact that the antibody response doesn’t seem to last very long. This is the reason that we are in the situation of having to have repeat boosters to boost neutralizing antibody responses against the new variants. This led us to investigate how we can tweak these vaccines in a way that could result in a more sustained immune response.

What have you learned about why some vaccines induce more durable immunity than others?

Part of the reason that many of these gold-standard vaccines (smallpox, yellow fever, etc.) induce decades-long or lifelong immunity is because they are live-virus vaccines that essentially cause an acute viral infection, and, for this reason, they seem to be able to stimulate very potent and durable immune responses.

About 10 years ago, we did several studies in humans and mice and found out that the yellow fever vaccine was engaging multiple receptors of the innate immune system — multiple toll-like receptors (TLRs), including TLRs 2, 3, 7, and 9, as well as RIG-I (retinoic acid inducible gene) and MDA5 (melanoma differentiation-association protein) — and we were able to show that the synergistic engagement of these receptors was critical for inducing a high magnitude and durability of antibody responses.

Armed with that knowledge, we wanted to design a synthetic vaccine, or a synthetic virus, that recapitulated the essential features of the yellow fever virus vaccine in its capacity to stimulate durable immunity. We devised a synthetic nanoparticle vaccine containing an antigen combined with agonists that signal through two different TLRs, TLR4 and TLR7, to see if triggering these distinct innate immune pathways would enhance immune responses. What we found was that these nanoparticle vaccines actually increased the magnitude and durability of antibody responses compared to nanoparticles that encapsulated agonists against a single TLR. In fact, we saw remarkably durable immune responses in mice and monkeys, not unlike what has been seen with the live-viral vaccines. That led us on the path to exploring adjuvants to promote enhanced and durable responses, and that’s one of the things we’ve been working on.

How does this compare with the signaling of the innate immune system by the mRNA-based COVID-19 vaccines?

This raises two questions: what is the innate mechanism through which this mRNA vaccine is stimulating antibody responses? In a follow up study, which we haven’t published yet, we have some data on this. The second question is: if we add critical innate stimuli to the mRNA vaccine, would it enhance the durability of this vaccine? That’s what we are working on now. We are trying to figure out what kind of stimuli you need. One of the challenges with the so-called modified mRNA vaccines, which were initially developed by Drew Weissman and Katalin Karikó, is that the modification of the mRNA was done in order to prevent the mRNA from activating toll-like receptors.

Well, it turns out that when you have too much TLR7 activation, you get interferons that can actually prevent translation of mRNA into proteins. The process of going from mRNA to protein is exquisitely sensitive to interferons that can shut it down by triggering protein kinase R activation, which isn’t what you want to happen. On the one hand you want your mRNA to produce protein, on the other hand you want a pretty strong innate response because that’s how vaccines stimulate long-lived immunity. The problem is if you have too strong of an innate response it prevents protein translation, so you’re stuck between a rock and a hard place. The question then becomes: How can you adjuvant the mRNA vaccine so it doesn’t suppress protein production, but it still provides the innate signaling required to get durable responses?

Part of the problem with durability is the innate immune part. The other piece of this is how long the antigen persists. This is important because if it is for a day, there probably isn’t enough sustained expression to get the immune response going. We, and others, have determined the kinetics of Spike protein persistence after vaccination with the Pfizer/BioNTech mRNA vaccine in mice, and the data suggest it peaks around days one to three post vaccination. With the yellow fever vaccine, you can detect virus replication occurring at seven to 10 days post vaccination, or maybe even a bit longer, so perhaps there is a more sustained antigen presence that also leads to greater durability with other vaccines.

Is this something that the self-amplifying RNA vaccine approaches would address?

Is it clear which adjuvant would be best to use with the mRNA-based COVID-19 vaccines?

I think people are trying a variety of different adjuvants that stimulate different innate pathways, but it isn’t yet clear which one will be optimal. We are delighted that our recent studies assessing different adjuvants in non-human primates paved the way for the clinical testing and recent approval of a subunit COVID-19 vaccine adjuvanted with AS03.

Are there any notable differences in the durability of immune responses that are induced by Moderna’s mRNA vaccine?

Is it possible that the durability issue with COVID-19 vaccines is also a function of the antigen and not just the mRNA construct?

That’s a great question. The issue of durability could be because of intrinsic limitations in the mRNA platform, or it could be due to limitations in the SARS-CoV-2 Spike protein itself. I think it’s more likely the former because when you look at other platforms, such as the recombinant protein with adjuvants, we see remarkably durable responses with the right adjuvant in non-human primates. With the Ad26 Johnson & Johnson COVID-19 vaccine — which doesn’t give as high a magnitude of neutralizing antibodies as the mRNA vaccines do — the durability of the antibody responses seems more sustained. This would suggest that it’s not so much a problem with the Spike protein, but rather an issue in terms of the platform.

What this data suggests is that it is possible to get more durable antibody responses to the Spike protein than what we have seen with the mRNA platform. That doesn’t necessarily mean that you wouldn’t see better durability if you used a different protein in the mRNA vaccines, but you still might improve durability further by using another platform or by adding an appropriate adjuvant to the mRNA vaccines.

Adjuvants are increasingly important, yet it seems as though it isn’t always well understood how they work. Are we getting to a point where adjuvants will be more rationally developed?

Previously, I’ve called adjuvants a sort of witches’ brew — there is AS03, which is squalene based on shark’s oil, and AS01, which is a saponin isolated from the bark of soapbark trees grown in Chile. One of the major focuses of my lab is to demystify these adjuvants mechanistically using our understanding of innate immunity and what pathways they stimulate. We still don’t fully understand how adjuvants work but slowly we are beginning to demystify them. We hope that one day, in the not-too-distant future, this will lead to the rational design of new adjuvants that recapitulate the magic of these witches’ brews!