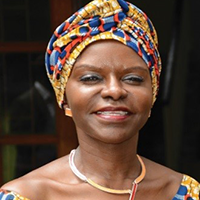 Francine Ntoumi is founder, chair, and executive director of the Fondation Congolaise pour la Recherche Médicale and a malaria expert who advocates for women in science.

Through the Central Africa Network on Tuberculosis, HIV/AIDS and Malaria (CANTAM), Ntoumi is highly involved in developing African health research capacities, especially for clinical trials. CANTAM is the first African network of excellence supported by the European and Developing Countries Clinical Trials Partnership, of which she is former senior scientific officer. Currently, she is senior lecturer in immunology at Marien Ngouabi University in the Republic of Congo; an associate professor at the University of Tübingen in Germany; a member of the Bill & Melinda Gates Foundation’s Global Health Scientific Advisory Board; and a fellow of the African Academy of Sciences. She also holds the distinction of being the Multilateral Initiative on Malaria’s first African leader (2007-2010).

Her accolades include the 2016 Christophe Mérieux Prize, the 2015 Georg Forster Research Award, and the 2012 African Union Kwame Nkrumah Regional Scientific Award for women. She is a laureate of the Réseau International des Congolais de l’Extérieur for her contributions in health research and holds a Ph.D. and Habilitation from Université Pierre et Marie Curie in Paris, France.