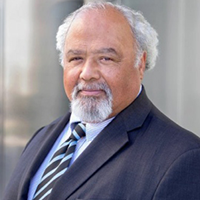 Eric Goosby, M.D., has worked in HIV/AIDS research, treatment, advocacy, and policy for more than 25 years and is a leading global expert and champion in fighting the disease. Currently he serves on the board of directors for Friends of the Global Fight Against AIDS, Tuberculosis and Malaria.

As U.S. Global AIDS Coordinator from 2009 to 2013, Goosby directed the U.S. HIV/AIDS response and led implementation of the President’s Emergency Plan for AIDS Relief under President Obama. He also was founding director of the Office of Global Health Diplomacy under Secretary of State Hillary Clinton. United Nations Secretary-General Ban Ki-moon appointed him Special Envoy on Tuberculosis in 2015.

Goosby began his career treating HIV/AIDS patients at San Francisco General Hospital, where he was associate medical director from 1984-1991. He joined the U.S. Department of Health and Human Services in 1991 as the first director of the Ryan White Care Act and served as deputy director of the White House National AIDS Policy Office and director of the Office of HIV/AIDS Policy from 1995-2000. He also was the founding CEO and chief medical officer of Pangaea Global AIDS Foundation.

He holds an M.D. from the University of California, San Francisco, where he completed his residency and fellowship specializing in infectious diseases and remained on faculty, receiving a Kaiser Family Foundation Award to support junior faculty. He has published over 250 peer-reviewed publications, numerous technical book chapters, and editorial pieces.