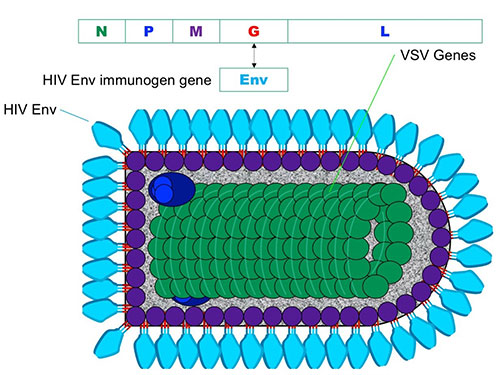 IAVI researchers are working on a modified VSV, which incorporates a gene for the HIV Envelope (Env) glycoprotein that allows synthesis of this key HIV target for stimulating immune responses. Image credit: Chris Parks

An important research initiative at IAVI is developing vaccine technologies that make it possible to deliver immunogens into the body in a way that induces long-lasting antiviral immune responses. Two technologies to accomplish this goal are being investigated by IAVI and its partners.

One technology is to use a replicating viral vector, and researchers at IAVI are primarily focusing on vesicular stomatitis virus (VSV). They are working on a modified VSV vector that incorporates an HIV Envelope gene and are testing it in preclinical studies. The VSV vector is designed to be used as a preventive vaccine, but this approach may also have therapeutic applications. IAVI also has VSV-vectored vaccine candidates in preclinical development for Lassa fever and Marburg virus disease. This VSV vector is used in the Ebola vaccine that was approved by the European Commission and U.S. Food and Drug Administration in 2019. It has been shown to be highly effective at preventing Ebola virus disease during outbreaks.

The second technology IAVI is exploring as a way to deliver vaccine immunogens is messenger RNA (mRNA). mRNA directs synthesis of proteins inside cells that your body needs to perform its many functions. Scientists are now investigating how to use mRNA to direct cells to make proteins that will elicit immune responses against pathogens like the influenza virus or HIV.