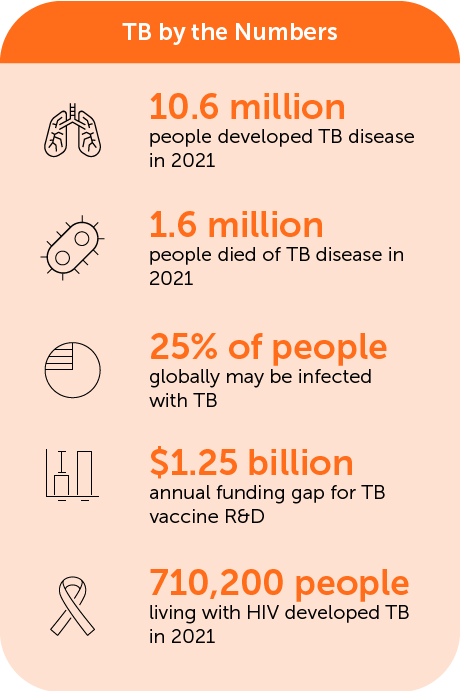 Tuberculosis (TB) is an airborne disease caused by infection with Mycobacterium tuberculosis (M.tb). In 2021, an estimated 1.6 million people died as a result of TB disease (WHO Global Tuberculosis Report 2022). As the COVID-19 pandemic has waned, TB once again has become the leading infectious cause of death in much of the world. TB kills more people each year than HIV and malaria, combined. Additionally, an estimated 10.6 million people developed active TB disease in 2021 (WHO Global Tuberculosis Report 2022).

According to the World Health Organization (WHO), 30 high TB burden countries accounted for 87% of all estimated incident cases worldwide, and eight of these countries accounted for more than two-thirds of the global total: India (28%), Indonesia (9.2%), China (7.4%), the Philippines (7.0%), Pakistan (5.8%), Nigeria (4.4%), Bangladesh (3.6%) and the Democratic Republic of the Congo (2.9%). TB is also one of the major contributors to the global public health and security threat of antimicrobial resistance, with multidrug-resistant TB (MDR-TB) and extensively drug-resistant TB (XDR-TB) both on the rise.

The only licensed TB vaccine, the Bacille Calmette-Guérin (BCG) vaccine, was developed more than 100 years ago. The vaccine has efficacy in protecting against severe TB disease, such as TB meningitis and TB spread via the bloodstream throughout the body (miliary TB), in infants and young children, but offers variable and mostly poor protection against TB occurring in the lung (pulmonary TB) in adolescents and adults. As active pulmonary TB in adolescents and adults is the major means by which M.tb is spread, new, effective vaccines capable of preventing pulmonary TB from developing in these populations is essential to control and eventually end the ongoing TB pandemic. 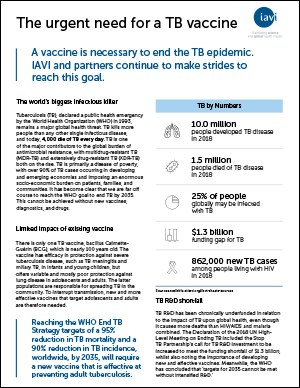 After decades of research, there is a renewed optimism for TB vaccines. In 2018, a Phase II trial conducted in South Africa showed that revaccinating adolescents with the BCG vaccine they received as infants significantly reduced occurrence of sustained TB infections. Another Phase IIb efficacy study, conducted by Aeras (subsequently acquired by IAVI) in collaboration with GSK, showed that the GSK TB vaccine candidate M72, administered along with the company’s AS01E adjuvant, protected against active pulmonary TB disease in adults latently infected with TB bacteria, with an overall vaccine efficacy of 50%. These findings, if confirmed in follow-up studies, would represent a breakthrough in the quest to develop an effective TB vaccine. These trials could also provide valuable insights that scientists can use to design even better vaccine candidates.

Advancing a TB vaccine candidate to late-stage development requires complex decision-making for vaccine developers and funders given the high cost and long duration of clinical trials designed to assess the efficacy of a TB vaccine candidate in preventing active TB disease. The absence of either a correlate of immune protection against developing TB disease or an animal model that reliably predicts vaccine-induced protection makes it very difficult to “de-risk” a decision to advance a candidate into efficacy trials. Once an efficacious TB vaccine is identified, it will be crucially important to undertake extensive investigations to identify correlates of immune protection, thereby facilitating the development of subsequent TB vaccines.

At this point, the major impediment to developing new TB vaccines is a severe lack of funding. Funding for TB vaccine R&D is disproportionately low compared to the devastating global public health impact of TB. Funding for TB R&D, including support for TB vaccine development, has fallen far short of the $2 billion goal set by participating country governments at the 2018 United Nations High-Level Meeting on TB.

In order to support and facilitate decision-making in TB vaccine development the TuBerculosis Vaccine Initiative (TBVI) and IAVI, with input from the research community, international policymakers, technical agencies, and funders, established the TB Vaccine Development Pathway. The Pathway is a methodology and interactive online tool that provides a structured development path and gating criteria for candidate TB vaccines.

The Pathway has been developed on behalf of the Global TB Vaccine Partnership, an alliance of organizations that aim at making novel TB vaccines a reality. The Pathway is funded by the Bill & Melinda Gates Foundation and is revised every two years to incorporate scientific and technical progress, as well as input from users. The most recent update was published in October 2019.

Fast facts about TB and HIV

TB primarily affects the lungs, though the bacteria can infect any organ. According to the WHO, almost one-quarter of the world’s population has latent TB infection and is at risk of developing active TB disease. The situation is even more dire for people living with HIV, for whom TB disease is the leading cause of death. In addition, people living with HIV:

For a full picture of the global burden of TB, see the WHO Global Tuberculosis Report 2022, published in October 2022.

IAVI is currently partnering in development of two novel TB vaccine candidates and exploring the application of mRNA technology to TB vaccine development.

IAVI is also engaged in a range of policy and advocacy initiatives in the TB vaccine field, including in collaboration with the WHO. Further, IAVI co-leads the TB Vaccine Advocacy Roadmap (TB Vax ARM) a global coalition of TB stakeholders that seeks to provide coordinated advocacy efforts in support of the TB vaccine agenda.