Scientists have known for some time that a fraction of people living with chronic HIV infection produce broadly neutralizing antibodies (bnAbs), which can overcome HIV’s high levels of diversity to block replication. At IAVI’s Neutralizing Antibody Center (NAC) in La Jolla, California, a team of researchers from IAVI and The Scripps Research Institute (TSRI) recently found themselves out to pasture, thanks to similarities between bnAbs and cow antibodies.

Now two more discoveries involving NAC researchers could have implications for development of both a vaccine and long-acting HIV prevention, according to studies published in PLOS Pathogens and Science.

“Vaccines arm healthy people with a repertoire of antibodies before they become infected with a particular virus,” said Dennis Burton, Scientific Director of the IAVI NAC at TSRI and Chair of TSRI’s Department of Immunology and Microbial Science. “But HIV is so well adapted to hide from the human immune system that typical vaccination strategies are impractical. Our job at the NAC is to explore novel approaches at the cutting edge of science.”

One such approach explored in PLOS Pathogens is to stimulate bnAbs that latch onto vulnerable sites on HIV’s outer surface, or envelope (Env), and prevent viral replication. Using samples from African volunteers in IAVI’s epidemiological studies, NAC scientists previously have isolated and described the characteristics of several of these bnAbs. Working backward, they lab-engineered an Env mimic, called an immunogen, capable of kick-starting the immune response that eventually produces bnAbs.

“In nature, HIV Env has evolved to protect itself with a glycan ‘shield’ – a sugar complex that deflects antibodies trying to attach to key sites where they can block, or neutralize, the virus,” said senior author Richard Wyatt, Director of Viral Immunology at the IAVI NAC at TSRI. “This study showed us that it’s possible to ‘delete’ parts of the shield from Env, as the first component of a vaccine, facilitating activation of B cells that can then access and neutralize HIV.”

While bnAbs remained elusive in this particular experiment, Wyatt and team were able to elicit “cross-neutralizing” B cells (precursors to bnAbs) as well as potent tier 2 autologous neutralizing antibodies in rabbits. 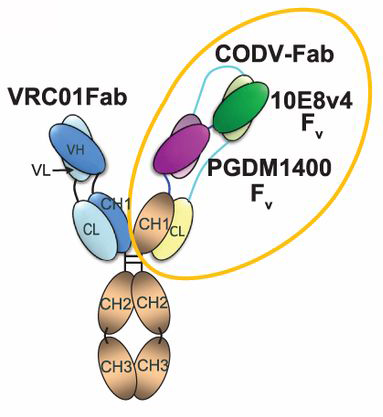 Configuration of the trispecific antibody. Image courtesy of Science.If a vaccine is the Holy Grail, then a new genetically engineered bnAb might be the holy trinity. A study in Science describes an antibody that combines three different bnAbs previously identified by scientists at the National Institutes of Health (NIH) and TSRI, including Burton.

“Not only did this ‘tri-specific’ antibody protect monkeys from infection with a monkey form of HIV called SHIV, it actually performed better than the individual, naturally occurring antibodies on which we modeled the engineered versions,” Burton said. “We’re exploring potential applications as both long-acting HIV prevention and treatment.”

Created by the NIH and the Paris-based pharmaceutical company Sanofi, the tri-specific antibody binds to three different critical sites on HIV’s surface. A safety trial is expected to begin in healthy people in late 2018, and a separate study in people living with HIV is under consideration.