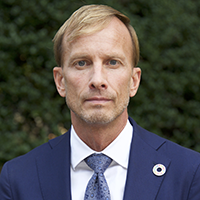 Faculty Co-Director of the Center for Global Health Quality and Professor in the Department of Medicine, Georgetown University Medical Center

Mark Dybul, M.D., is the faculty co-director of the Center for Global Health and Quality and professor in the department of medicine at Georgetown University Medical Center.

Dybul has worked on HIV and public health for more than 25 years as a clinician, scientist, teacher, and administrator, most recently as the executive director of the Global Fund to Fight AIDS, Tuberculosis and Malaria.

After graduating from Georgetown Medical School in Washington D.C., Dybul joined the National Institute of Allergy and Infectious Diseases as a research fellow under director Dr. Anthony Fauci, where he conducted basic and clinical studies on HIV virology, immunology and treatment optimization, including the first randomized, controlled trial with combination antiretroviral therapy in Africa.

Dybul was one of the founding architects in the formation of the U.S. President’s Emergency Plan for AIDS Relief, better known as PEPFAR. After serving as chief medical officer, assistant, deputy and acting director, he was appointed as its leader in 2006, becoming U.S. Global AIDS coordinator, with the rank of ambassador at the level of an assistant secretary of state. He served until early 2009.

He has written extensively in scientific and policy literature, and has received several awards and honorary degrees, including a doctor of science, honoris causa, from Georgetown University.